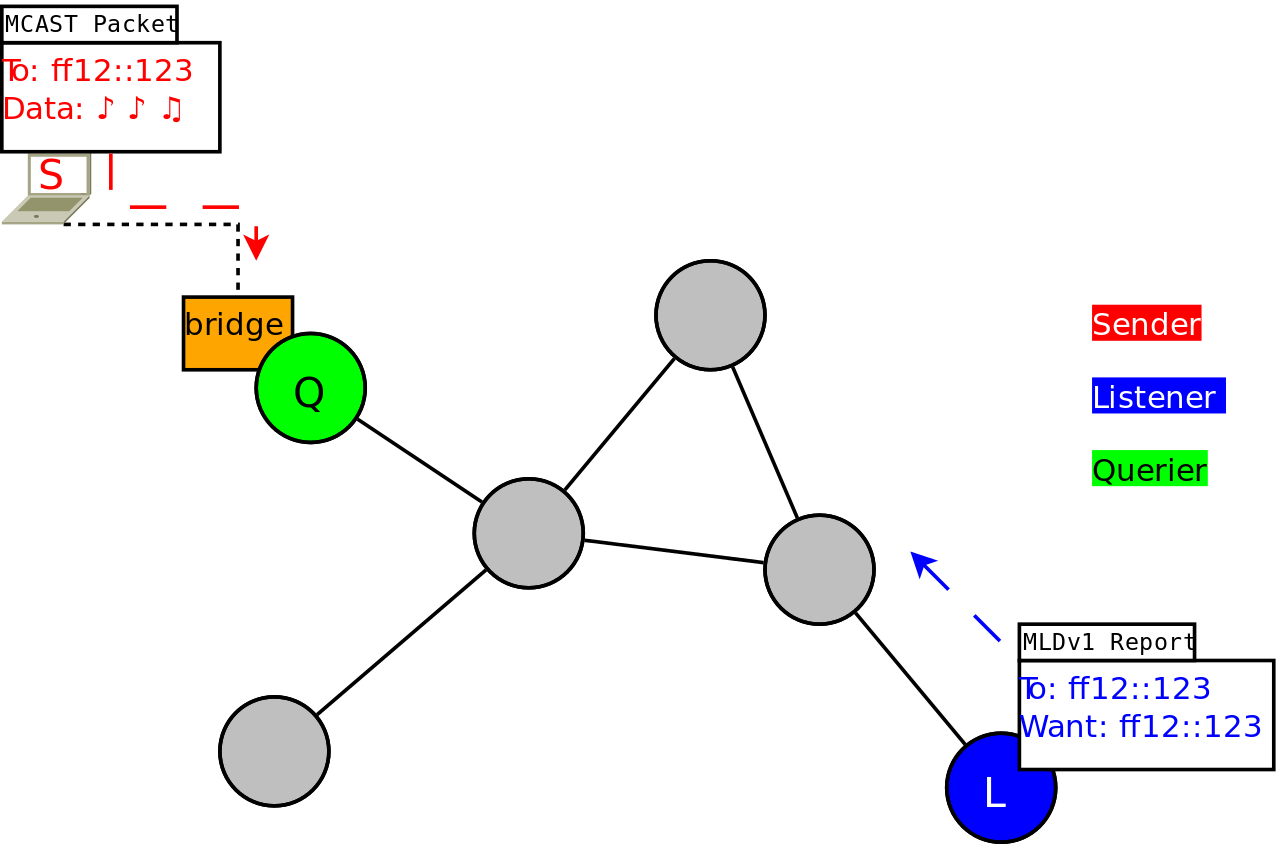 A multicast listener announcing it's presence via a MLDv1 report

Hosts wanting to receive multicast traffic of a specific group announce this via IGMP/MLD reports. This way multicast routers and snooping switches/bridges are able to learn where which multicast packets are wanted.

The destination address of MLDv1/IGMPv2 reports (in this example "ff12::123") is usually one a multicast router or snooping switch/bridge is not listening to: They are not able to actively join every possible multicast group. So only checking the multicast addresses in the translation table and forward the report to nodes matching the destination address would not be enough in the scenario described above. Node L needing to send a report after the querier (here: on the node with the bridge) asked for it would simply drop the report. 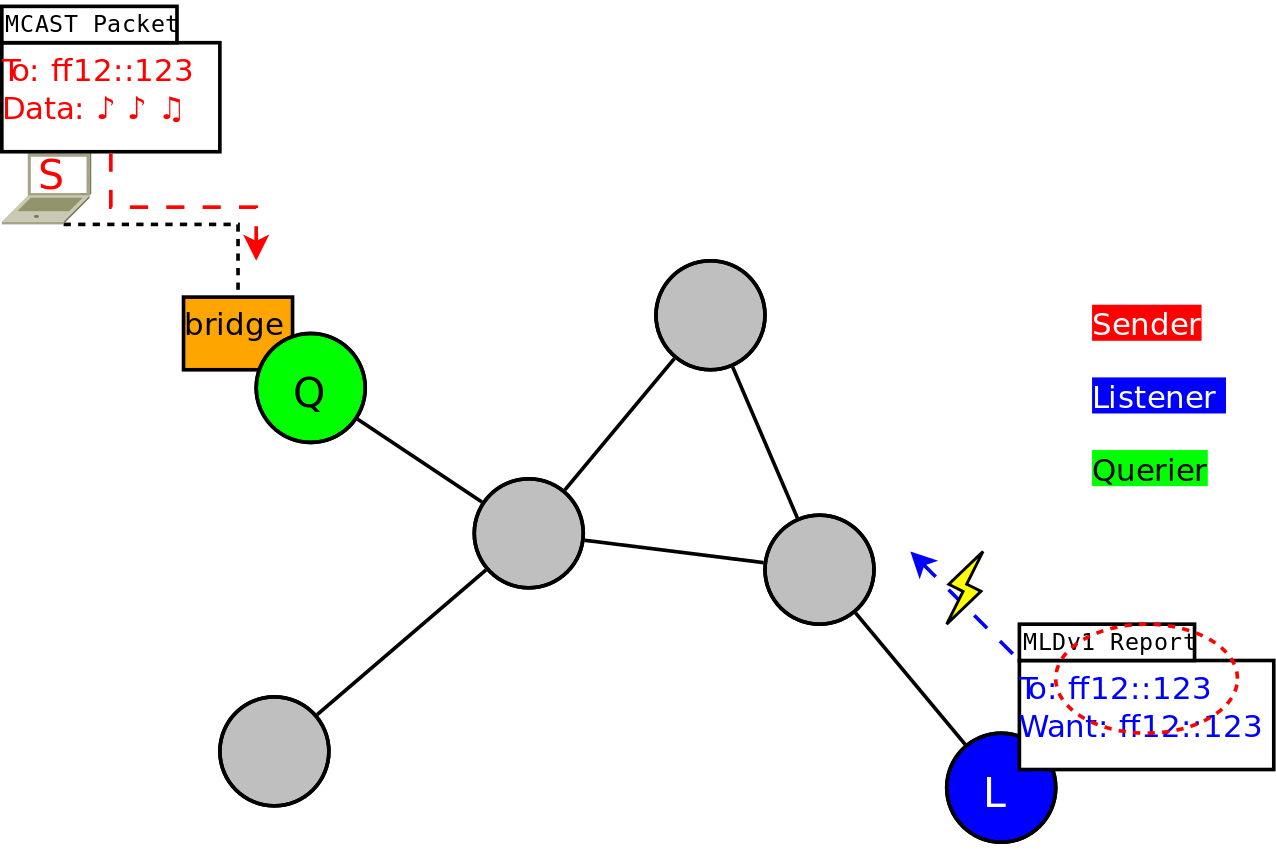 Neither the Querier nor the Sender are listening to "ff12::123"

This in turn would result in the bridge not forwarding the multicast data from the sender behind its bridge port even though a listener exists: 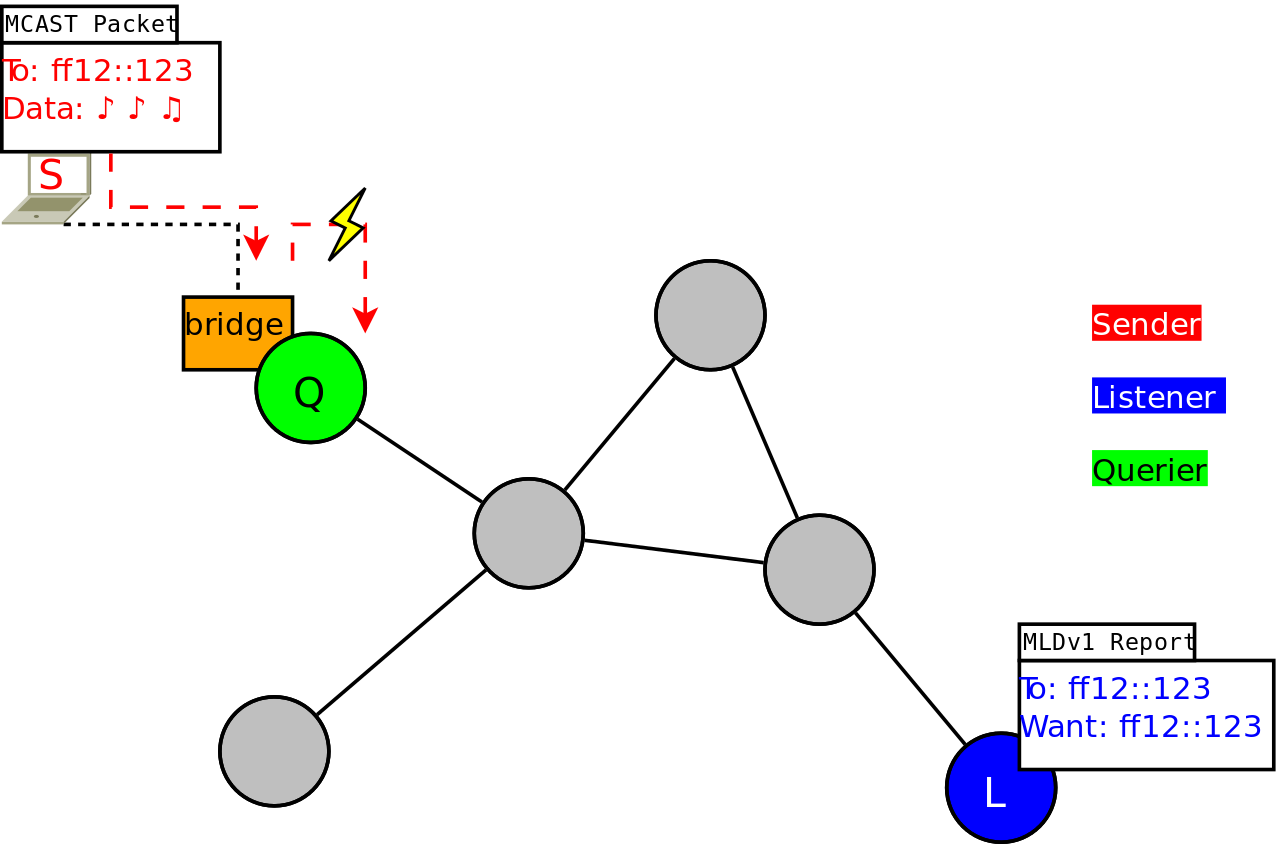 Note that even though MLDv2/IGMPv3 require listeners to report to the all-multicast-routers destination address (ff02::16, 224.0.0.22) the querier implementation in the Linux bridge code does not listen to them which creates the same problem as with MLDv1/IGMPv2. RFC4541 ("Considerations for Internet Group Management Protocol (IGMP) and Multicast Listener Discovery (MLD) Snooping Switches") leaves it open whether snooping switches/bridges (with or without a querier) should listen to the all-multicast-routers destination address.

One easy approach is to simply flood multicast reports to all other batman-adv nodes.

(Yet another simple approach to tackle these disadvantages could be through segmenting the IGMP/MLD domain. The OpenWRT-based firmware framework "Gluon", aiming at wireless community mesh networks, currently has a patchset for this pending: https://github.com/freifunk-gluon/gluon/pull/402)

Side note 1: Why does the current implementation without bridge support have no such issues?¶

There are usually two parties interested in multicast listener reports. For one thing, bridges ("software switches") and snooping switches (enterprise hardware switches). For another thing, multicast routers want IGMP/MLD reports. If the former, a bridge, exists then multicast optimizations are turned off at the moment, so the issue can't occure. For the latter, reports to multicast routers, let's consider the following two cases:

As described above, while there is no issue for the current implementation as is it faces compatibility issues with any upcoming bridge integration. Bridged nodes need to be able to rely on any other node, including non-bridged / "old" ones, to forward its own reports properly.

To avoid packet loss, bridged nodes will force any old node to hand over any reports. This is done by increasing the multicast tvlv version number to two: 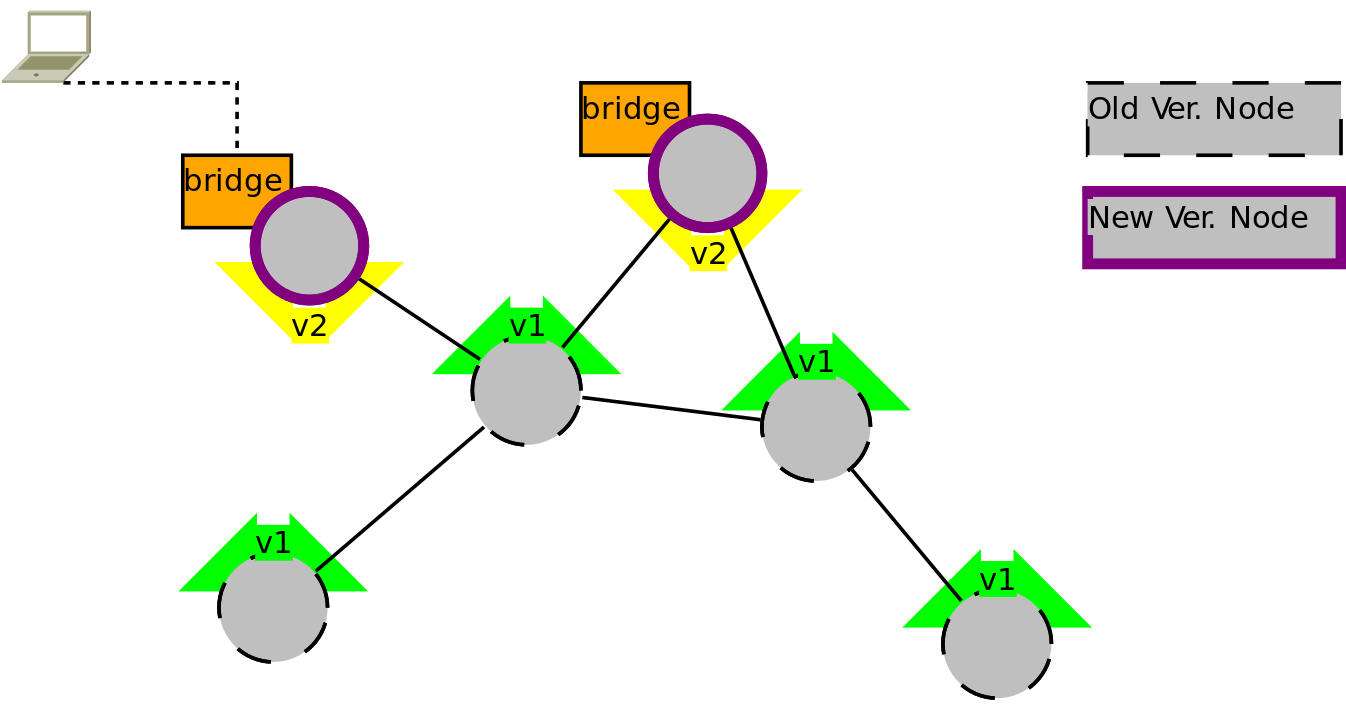 From the perspective of an old node with insufficient report handling and multicast tvlv version one the bridged node will then appear to be incapable of announcing its own listeners. 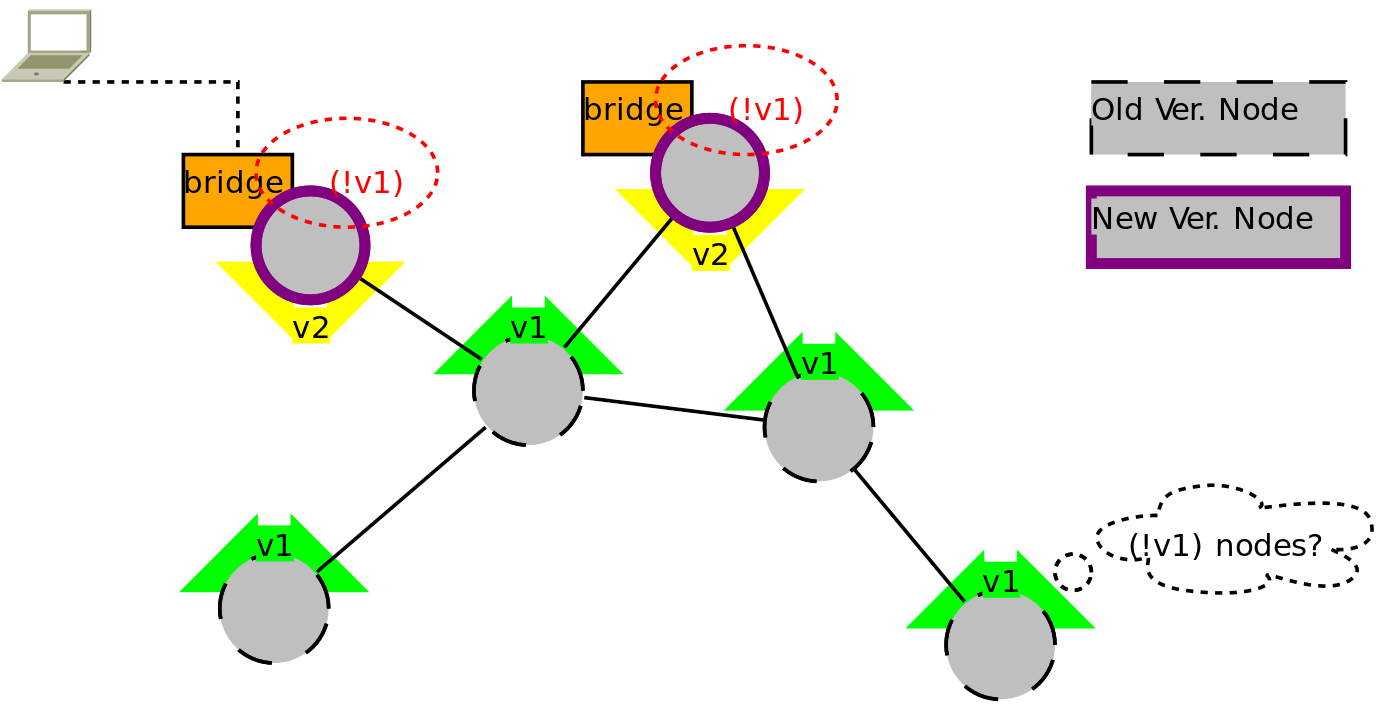 An old node looking for nodes without an mcast v1 tvlv

The old node will turn off its own multicast optimizations and flood any multicast packet, including reports: 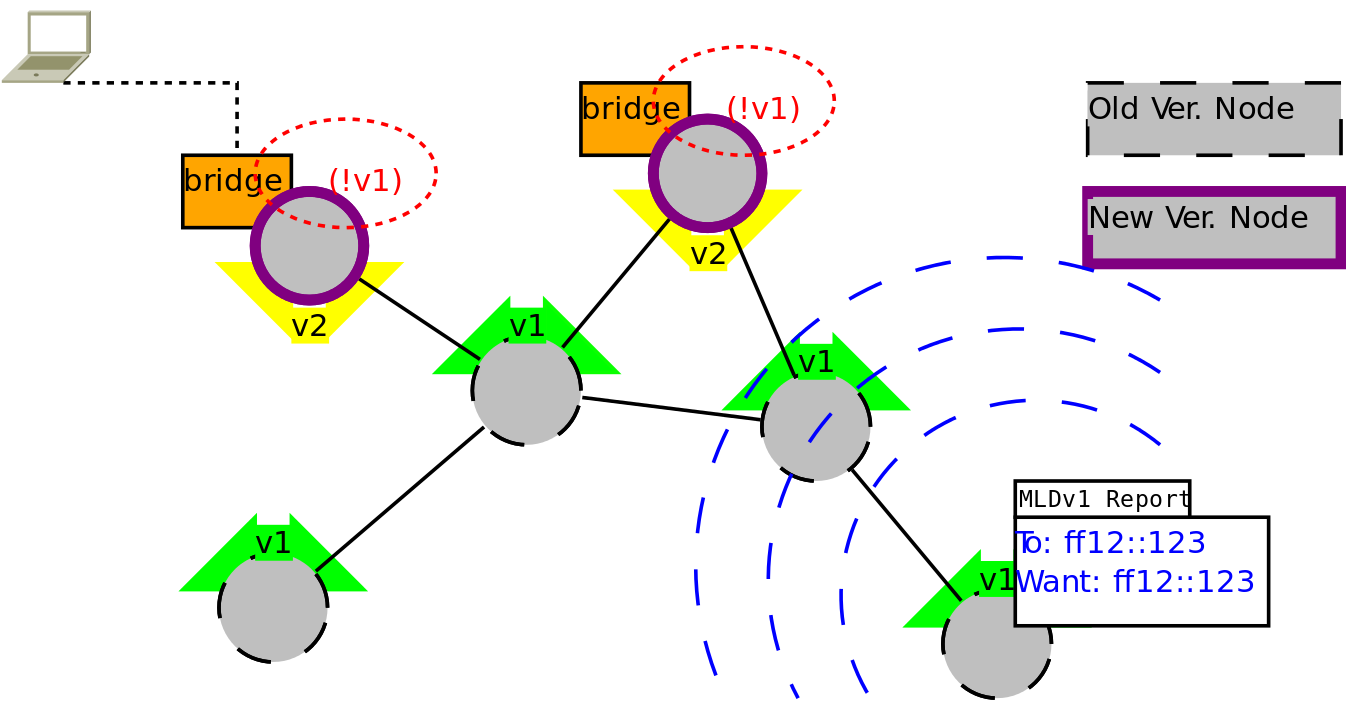 An old node flooding its reports

To avoid regressions for non-bridged setups currently relying on multicast optimizations, the following is done: Any node without a bridge but capable of proper report handling will register both a multicast tvlv version one and two: 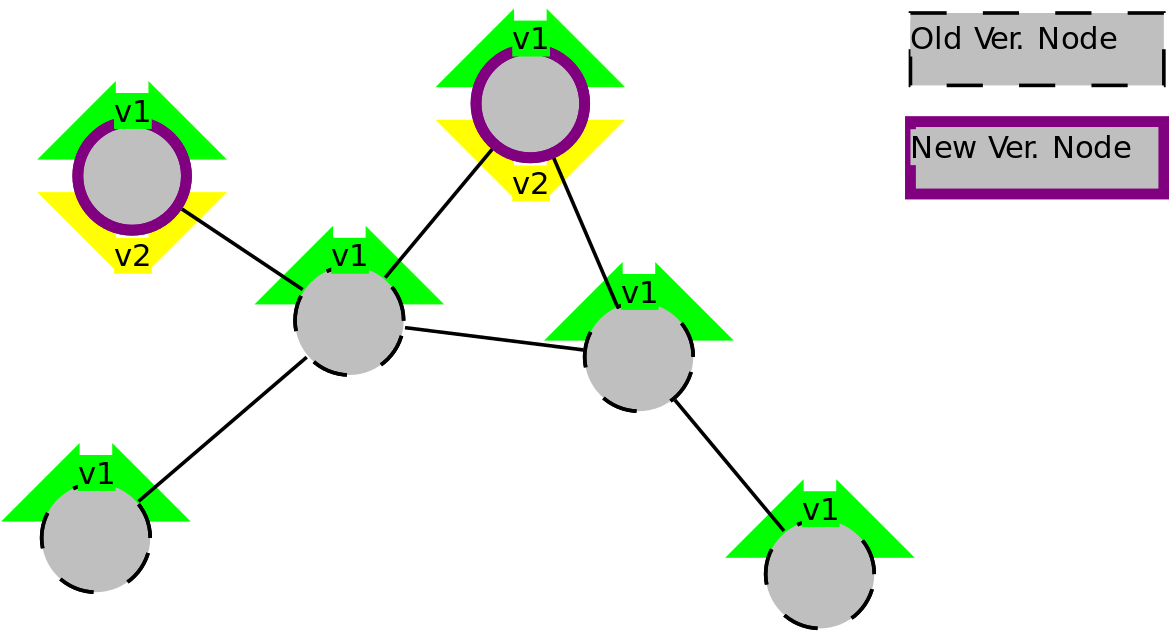 A mesh without bridges: New nodes announcing both v1 and v2