DAT (Distributed ARP Table) is a mesh-wide ARP cache that helps non-mesh clients to get ARP responses much more reliably and without much delay. In a common wireless mesh network, getting a broadcast packet (the ARP request) from the source to the proper destination (the host with the requested IP) would probably require several retransmissions because of the packet loss. DAT aims to improve the ARP experience by placing the answer to ARP requests to a known location as well as caching it whenever appropriate.

The DAT core mechanism consists in storing the content of all the ARP replies that travel over the network on a specific group of nodes. Given an IP address, the group of nodes containing its related ARP entry (IP & MAC Address) is known to every other mesh participant thanks to a distributed hash function. In this way, whenever a client issues an ARP request, the mesh node can intercept and forward it directly to the nodes belonging to the specific group of nodes where the corresponding entry is stored. Requests are sent as unicast packets and therefore the probability of losing the packet is much lower compared to broadcasted packets.

In the following illustrations we can see a comparison between the classic ARP mechanism and DAT. The scenario contemplates a non-mesh client served by node A that has to retrieve the MAC address of another non-mesh client served by node F. The source client issues an ARP request and, as we can see in the first picture, node A rebroadcasts it and so do its neighbors, until the entire network is flooded. Upon reception, node F will deliver the ARP request to its clients and will possibly get an ARP response to send back to node A. However, it is also possible that the broadcast packet gets lost at some point during the flooding (e.g. on the link between node E and F as shown in the picture) forcing the source client to wait for a timeout and to issue a new request. 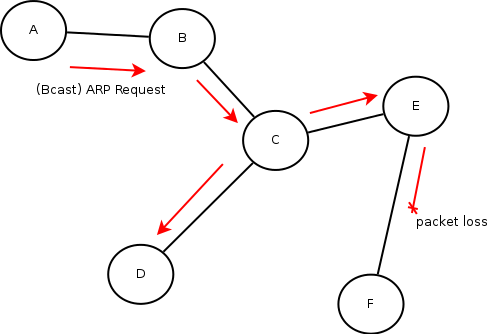 DAT will not use any broadcast packet. Node A gets the ARP request, computes the group of nodes related to the requested IP (in the following picture we assume only node D to be in this group of nodes) and sends the ARP request as unicast (green arrows). Node D will reply to node A (blue arrows), the latter will first forward the packet to the non-mesh client that originated the ARP request and then it will store the received entry in its local storage for further caching. 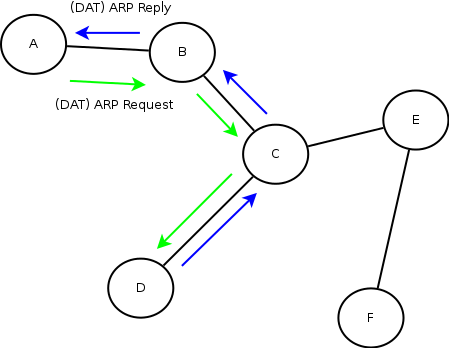 DAT can be turned on/off in two different manners:

With (1) it is possible to decide whether to include DAT or in the final kernel module (default to ON). In this way, people confident enough that DAT is not needed at all can easily prevent batman-adv to compile and include it, so leading to a smaller binary size.
To do so it is possible to customise the corresponding option in the package Makefile or by means of the menuconfig for the in-kernel module.

With (2) instead (after having decided to compile DAT in the module at point (1)) it is possible to enable/disable DAT at runtime by means of the following batctl command:

Since DAT is a network wide cache, each node stores a little piece of this big table in its own memory. To see what entries the node is currectly storing, it is possible to use the following command:

An explanation of the output can be found here (link needed).

If you want to read a bit more about DAT technical details, please consider visiting the technical page.