The target of this page is to explain the inner details of the implementation of DAT (Distributed ARP Table). For the general idea and the problem that it is trying to solve, please refer to the DAT page.

DAT is a Distributed Hash Table aimed to store ARP entries and to allow nodes to perform fast lookup operations. All the operations in the DHT (get and store) are performed on a set of nodes computed by means of a distributed hash function which input value is an IPv4 address.

In order to let DAT work correctly, the batman-adv module has to analyze ARP messages going to and coming from the mesh network, therefore a snooping mechanism has been provided.
A node uses ARP replies issued by the clients it is serving to populate its local cache and the distributed table. Any ARP request going to the mesh network, instead, is blocked in order to ask DAT for the reply. If DAT is not able to provide an answer then the messages is delivered to the clients.

The snooping mechanism is actually made up of 4 events, which trigger different actions.
The 4 possibilities are the following:

It is also possible that DAT does not have the entry for a particular IP (like described in the previous section), e.g. the first time this IP is asked or because the entry has been purged out due to missing activity. In this case DAT will not be able to provide any answer for the requested IP address. The "blocked ARP request" is therefore sent as broadcast packet (like a normal ARP request) after a timeout of 250ms is hit (during this period the node will wait for the answer from the DHT). This way the client can get the reply it was looking for through the normal ARP mechanism and DAT can learn the new entry by inspecting the incoming messages.

In order to distinguish own DAT messages from classic unicast packets, a new packet type has been introduced: the UNICAST_4ADDR. This new packet type has both the source and the destination address (the classic unicast carries only the destination) and a sub-packet-type field. Thanks to the latter, DAT is able to exactly distinguish different packets and to provide appropriate debugging information if needed.

In order to prevent backward compatibility breakage, several measures have been taken:

To simplify debugging operations a specific log level has been added: the dat log level. Enable it by typing the following command:

The Theory and the high-level mechanism¶

The DHT which D.A.T. is based on is actually inspired by CHORD, which is one of the earliest Peer-to-Peer algorithm based on a DHT. B.A.T.M.A.N.-Advanced inherits the shape of the key space and the rule used to allocate objects onto participant nodes.

Going a bit deeper into the details, the key space is represented by a ring on which the 2^16 keys are equally distributed. Being a ring means that arithmetic operations in the key space are modulo 2^16.

As in CHORD, either the objects to distribute into the DHT and the participant nodes are mapped (by means of an hash function) to keys in the same space. Therefore, while scrolling the ring it is possible to find either keys mapping to an object and keys mapping to a node. This mechanism is definitely useful in order to decide which key is allocated on which node. In particular whenever there is a new object that we want to store in the DHT, the steps to follow are:

In this way, as soon as all the nodes shares the same vision of the ring, given a generic object, whatever node can identify the 3 participants that are storing the object content and query them. 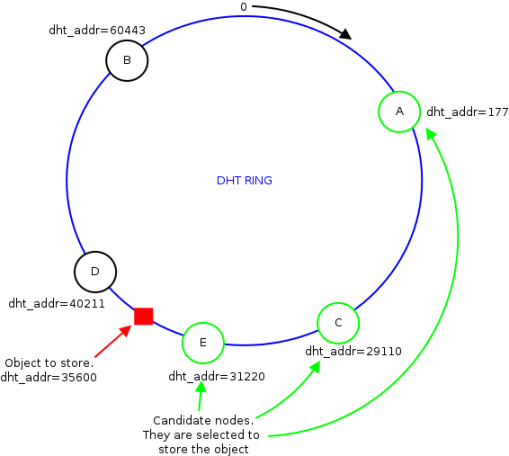 In the figure above, it is possible to see a DHT ring populated with some participants. At some point a generic node in the network wants to retrieve the content for the red object. The node computes the key of the latter and then identifies the 3 nodes that store the content (the green ones in the figure). Now the node looking for the object content can directly query the selected participants and retrieve the data.

How D.A.T. merges ARP and the DHT¶

Once the DHT concept has been introduced into B.A.T.M.A.N.-Advanced, the next step is to merge the ARP protocol and let D.A.T. born.

D.A.T. actually exploits the DHT mechanism to store ARP entries of the form [IP, MAC] (this object is shaped like a normal ARP entry). The IP is used as input for the hash function as it is the always known part of the entry. In particular, whenever a node detects an ARP entry in the network (because of an ARP request/reply being sent/received by one of its clients) it simply activates the previously explained mechanisn and stores such entry into the DHT.

Whenever a node wants to retrieve a MAC address (e.g. due to an ARP request issued a client of its own) it will directly use the DHT to retrieve the ARP entry, and only if the DHT cannot provide the wanted answer (e.g. this entry has never been seen in the network) then the node fallbacks to the classic broadcast mechanism. As it is possible to understand, using the DHT will make the nodes avoid to use broadcast packets as much as possible and will make them rely on unicast packets sent to the node storing the data in the DHT directly.