A node broadcasting through the mesh 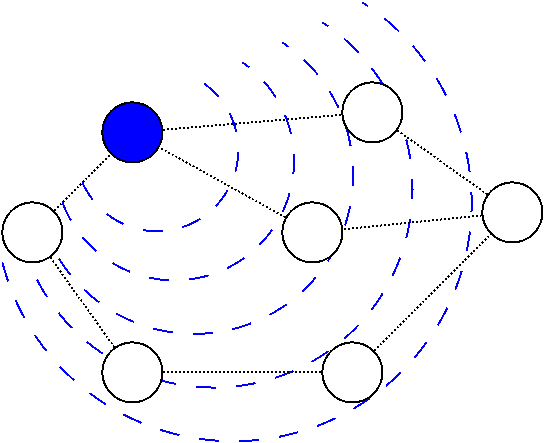 Broadcasting is a method in computer networks to distribute a packet to all available nodes. batman-adv supports broadcast via its classic flooding algorithm.

To avoid frames looping around forever (a broadcast storm) an originating batman-adv node tags the frame with a sequence number which increases with every new broadcast frame this node transmits. The sequence number allows other nodes to detect whether it received a frame before. Such duplicates will then simply be ignored. 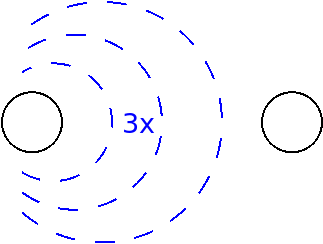 To compensate for that batman-adv (re-)broadcasts a frame on a wireless interface not just once but three times when classic flooding is used.

Furthermore, for the second and third broadcast a delay of 5ms is applied for each to increase the probability that one of the broadcasts arrives.

Last but not least 802.11 broadcasts are usually performed at the lowest Wifi bitrate. If a high broadcast throughput is needed, it is therefore usually recommended to increase the Wifi rate for multicast transmissions in the wifi driver.

To reduce the number of (re-)broadcasts batman-adv tries to detect whether in a particular scenario on a specific interface a broadcast can be avoided.

The following three rules are currently checked and applied:

We can avoid sending a packet into the void.

Three nodes with a single neighbor per interface each

We can avoid echoing a packet back to the node it originally came from.

A node avoiding to echo back to its forwarder

We can avoid echoing a packet back to the originator node (not just neighor) it was forwarded from.

Broadcast flooding comes with a cost: It bothers every node in the mesh and especially in larger mesh networks this can add up quickly. Therefore if the number of nodes interested in a specific frame is actually just a small subset of all nodes then it is usually desirable to use a more specialized approach.