Added by Antonio Quartulli about 8 years ago. Updated over 5 years ago.

In case of an asymmetric VLAN configuration as shown in the picture it is possible to generate a loop even if BLA is enabled. 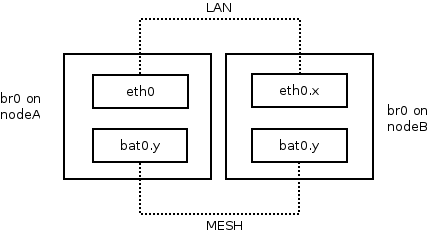 The loop is triggered by the fact that the two potential backbone nodes won't recognize each other. This can be understood by looking at the steps taken by a BLA ANNOUNCE message:

I don't see a clear solution to this problem because even if we make batman-adv decapsulate any packet until we get to the inner layer, we still have the problem that node A won't be recognized by nodeB (nodeA will always send with no VLAN header).

Updated by Antonio Quartulli about 8 years ago

Updated by Antonio Quartulli about 8 years ago

Updated by Simon Wunderlich about 8 years ago

that's an interesting corner case, and I think you are right about your conclusion. This would loop, although not endlessly because a new VLAN header is added in each round until the MTU is reached, but still ...

We wouldn't have this problem if we BLA would be able to work on VLANs in VLANs (QinQ), but it works on only one layer of VLANs. It would also work if there wasn't a VLAN ontop of batman (since BLA would kick in for that specific VLAN x then), but there is most probably a reason for that too.

Updated by Simon Wunderlich over 7 years ago

the firmware showing that problem was probably fixed - unless someone else has that problem in any non-artificial setup, I'm closing this ticket - please reopen if necessary

Updated by Sven Eckelmann over 5 years ago