Note: This page documents internal stuff of batman-adv. It describes the internal state representation of client entries in translation tables. Read with care

This section describes the flags used in the TT code, what they mean and where they are used. There are 3 possible locations where the flags field is used:

Mesh nodes on the same backbone gateway ignore each others tt announcements (tt updates, roaming advertisements, etc) and can therefore have the same local list.

This extension also affects the flag handling, which will be explained for each flag in detail in this section.

As this flag is only used in OGM and for internal function handling, there is no change.

For OGM handling, there is no change - the TT_CLIENT_ROAM flag is sent along with a TT_CLIENT_DEL flag when a client has been removed because of roaming. 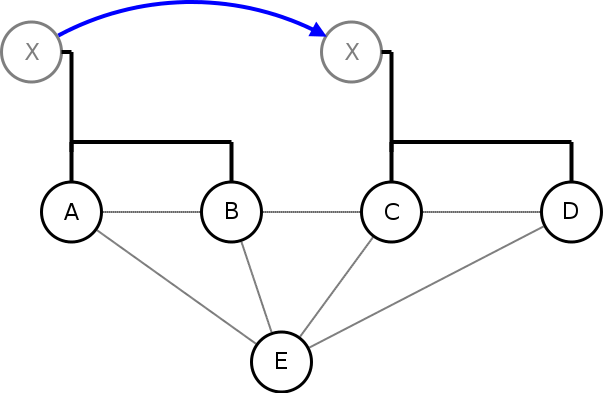 Depending on the order of arrival of the OGMs at node E, we have different behaviours.

Example1: order of arrival: DEL from A, ADD from C, DEL from B, ADD from D

Example2: order of arrival: DEL from A, DEL from B, ADD from C, ADD from D

As a WiFi client can never become an Ethernet client again (the MAC address is connected to the NIC), we never clear this flag even if a node can not see this client directly as WiFi client.