The original idea from Linus has been discussed and enhanced by an international committee in December 2011 ... in a pub in Berlin while drinking some nice beer :) The draft presented here may therefore be incomplete, ideas and volunteers for implementation welcome!

The new OGM protocol in BATMAN V is designed to send OGMs at much lower regular intervals than BATMAN IV, because we split the local link detection part off into ELP. The general idea is to reduce overhead of messages flooded through the network. The disadvantage is that reaction to link failures will also become slower. This RIP protocol (maybe we need a better name?) is designed to react to drastic link changes or outages. It is an extension to the new OGM protocol and works (only) along with it.

We discuss the situation at an example: 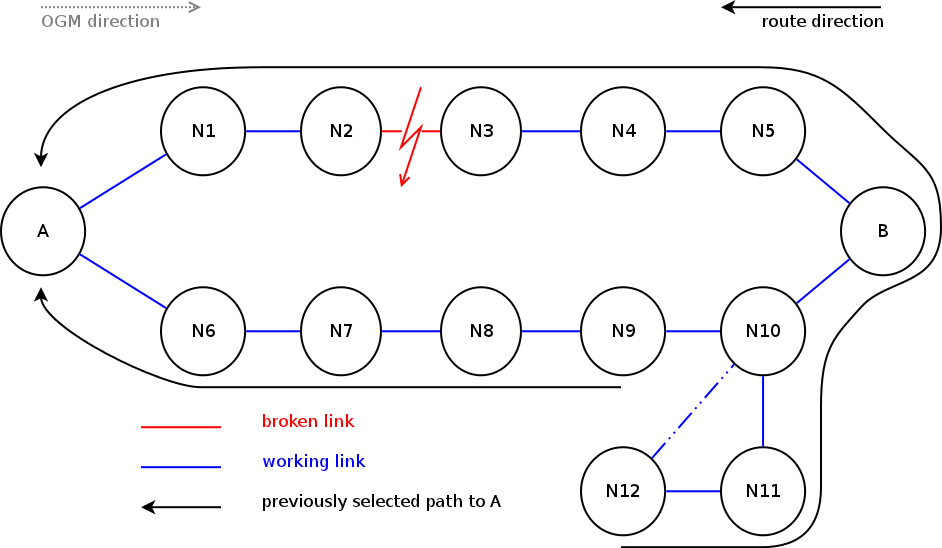 The link between the nodes N2 and N3 suddenly breaks. Unfortunately, this was the route packets where taking on their way from node B to node A. We now could wait until OGMs are flooded on the alternative path to B (or even N3) and replace the (now broken) path. With the new OGM protocol and intervals of 5-10 seconds, this can take some time. On the other hand, ELP sends messages much more often and can detect the link change fast - locally. The task is to globally inform the mesh about the changed situation.

N3 will detect that the link to node N2 through ELP. This does not necessarily lead to route deletion directly, as we may reach many Originators through this link (A, N1, N2, ...). As soon as we receive a frame on N3 which is to be sent over this link (e.g. B->A), we broadcast a death note for OGM A. This death note means that N3 can no longer serve as router for A. We also delete our stored router for this Originator.

At some point, other nodes will also receive the death note who have a still working path towards A (or at least believe so). In our example, N9 will receive the death note from N10, but it does not use N10 as router for A - the selected router is N8. In the case that it (still) has a route to A, so it will send an OGM Update Request via Unicast to its router N8 with final destination A. OGM Update requests are simply passed from node to node until they reach their final destination A. As soon as A receives this OGM Update Request, it will immediately broadcast a new OGM with a new sequence number.

The new OGM from A will be flooded as usual through the mesh. It gets interesting for the nodes who had previously lost their route (N3, N4, N5, N10, N11, N12 and B): They can immediately acquire a new, valid (but maybe suboptimal) route to A, as they have previously deleted their selected route, and thus can get communication working again promptly.

From the algorithm sketch, we can see:

Death Notes and OGM Update Requests may share a packet type and be distinguished by a flag. They basicly contain: