This page shall show a couple of easy examples of how to use and setup a mesh network with B.A.T.M.A.N.-Advanced (further referenced as batman-adv). It is assumed, the tool 'batctl' was installed which allows a more intuitive configuration.

In the first configuraton step you need to tell batman-adv which interfaces it should use to build the mesh network. This can be either wifi devices like wlanX or athX but also common ethernet devices, usually ethX. batman-adv is not limited to a certain interface type, therefore you can use any interface you can find with 'ip link' (even pan0 for bluetooth if you like B.A.T.M.A.N. more than the normal, build-in 'mesh-protocol' of bluetooth :-) ). Those interfaces can be added by using 'batctl if add ifname', e.g.

Make sure, this interface is up and running ('ip link set up dev eth0') and use the command

to verify its status. Check the system log for hints in case it does not behave as you expect.

Despite being up, those interfaces that have been added using batctl don't need any ip-address configured as batman-adv is operating on layer 2 (which is a common mistake by people who are more familiar with the 'old' batmand or other layer 3 routing protocols)! Those interfaces are bridge-interfaces - you just must not use those plain interfaces for routing anymore.

So where are we going to send data packets to if not to those interfaces we have given batman-adv? That's where the virtual bat0 interface (created by batman-adv) is getting into the game. Usually you are going to assign IP adresses to this one - either manually or via dhcpv4 / avahi autoconfiguration / dhcpv6 / ipv6 autoconfiguration. Any packet that enters this interface will be examined by the batman-adv kernel module for its destination mac-adress and will be forwarded with the help of B.A.T.M.A.N.'s routing voodoo then, so that finally, magically it pops out at the right destination's bat0 interface :). 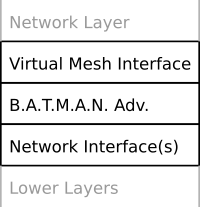 On all nodes, install batman-adv, load the module and enter the following commands (as root):

You can now use the automatically assigned IPv6 link-local adresses on bat0 (usually starting with fe80::...), modern operating systems should support this. Or you can assign IPv4 addresses manually on all those nodes (i.e. 'ip addr add 192.168.123.x/24 dev bat0') or one of the laptops in range has to have a DHCP server running on the bat0 interface. As batman-adv is operating on layer 2, even dhcp-messages can be send over the mesh network.

Note: batman-adv inserts an additional header of 32 bytes into each data packet being send over the mesh. Therefore we are increasing the maximum size of a packet over the plain interfaces to 1532, so that packets with the standard MTU of 1500 can pass normaly through bat0. You might also decrease the MTU to 1468 on all hosts but is usually just do-able in more or less static- and small-scaled mesh-networks.

If you have a couple of computers that you don't want to run batman-adv on but you still want make use of the mesh network, you will need to configure an entry point for them on a node running batman-adv. Any device running Linux (a notebook, a wifi-router, a pc with a wifi card, ...) can be setup to work as a mesh entry point. In addition to the usual mesh setup steps mentioned above it is necessary to configure a bridge over bat0 and the interface those 'non-B.A.T.M.A.N.' machines are connected to. Let's say eth0 is the interface on a mesh access point where those non-B.A.T.M.A.N. systems are attached to and wlan0 is the interface on a mesh access point through which we want to build the mesh network.

On each mesh access point, install batman-adv first, load the module and enter the following commands:

From now on you won't want to use eth0, wlan0 or bat0 for any routing anymore, instead you are just using the new bridge interface 'mesh-bridge'. Any packet our mesh access point receives over eth0 will be forwarded to bat0 because of the bridge. batman-adv will forward it through the mesh according to the destination's mac address.

Note: Assign the IP Address to mesh-bridge in this case, not bat0.

For the MTU-part have a look at the note above.

This may also work with other distributions that use the /etc/network/interfaces file.