The original batman-adv multi link optimization worked on a local level - which is fairly easy to implement and works well as long as as all nodes are configured the same way and have similar link qualities. But local decision may be suboptimal network wide - for example, consider some dual radio mesh nodes where the first node starts on 5 GHz, but after some hops (alternating between 2.4 and 5 GHz) it stops at a 2.4 GHz-only device. If it had chosen the other (2.4 Ghz) link in the first hop, choosing the same frequency twice could have been avoided, and the total path quality would be better.

This limitation can be solved by relaying the information about multi-interfaces over the whole mesh. This requires some changes to routing and forwarding, which are to be described here.

The main idea is to use n + 1 routing tables instead of just one, with n being the number of configured interfaces:

The routing table is chosen based on the interface the packet entered the system by.

To propagate different paths, the OGM forwarding is changed:

Path Metric computation
Each node, creates and sends its own OGMs to let all the other peers in the network build their routing table

For example, consider the following illustration:

We consider all link qualities equal. What should happen according to the rules (after some OGMs): 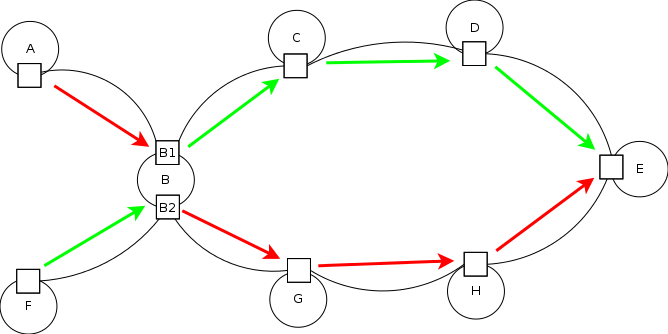 The presented example is another consequence of the mechanism explained in this page.
Since the multi-interface optimisation is not per-link anymore but is now defined network wide, packets can possibly be routed through two completely different paths in order to reach the same destination.

The result is that, with this new feature, multi-interface nodes can act as routing splitting point which leads to a first tempative of real multi-path routing.

There is an implementation based on the description above currently pending for review. It offers some debugging facilities:

The default originator table can be found at its original place, using ''batctl o''. The following examples represents the topology shown in the top of the page, debug information obtained on node B, using OpenWRT and virtual machines: