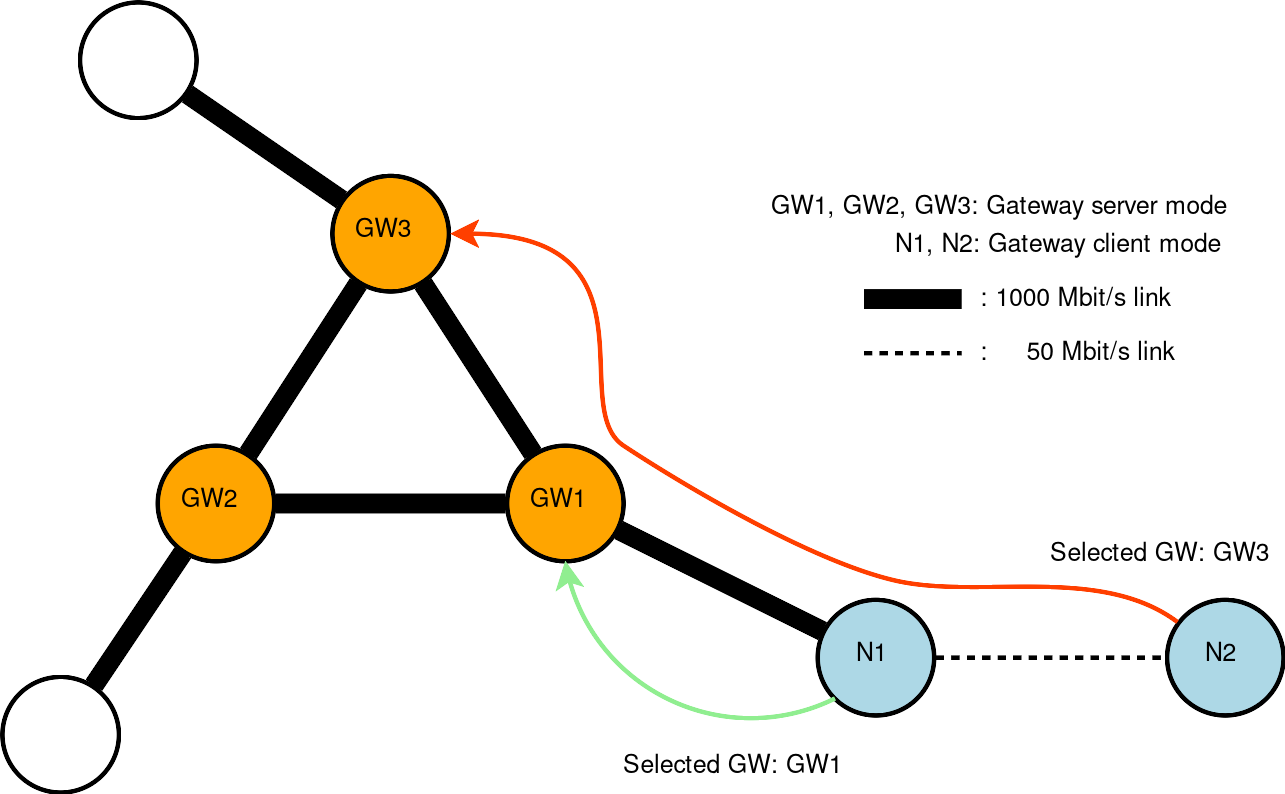 The scenario consists of BATMAN V nodes. GW1, GW2, GW3 and N1 have 1 Gbit/s links. While N2 is behind N1 with a considerably lower throughput, here 50 Mbit/s.

While node N1 selects the correct, best gateway it is directly connected to, node N1 only selects GW1 with a 33% chance. And by a 66% selects either GW2 or GW3. Leading to an unnecessarily long route.

On N1, the gateway table looks as follows:

Node N1 correctly selects GW1 as its best gateway thanks to the hop penalty which reduces the throughput by 230/255 = 5.9%. The difference is larger than the configured 5.0 MBit selection class, so node N1 will always select GW1 as its gateway for the unicasted DHCP packets.

On node N2 however the table gateway table looks as follows:

This leads to node N2 selecting the gateway which it first heard an OGM from. So it "randomly" selects one of the three available gateways. The probability to select the correct, best gateway decreases the more gateways are behind GW1 for N2.

Node N1 had more, better information for selecting the best gateway which got lost by calculating the minimum.

In theory this issue could happen with BATMAN IV, too. However it is a lot less likely to happen because BATMAN IV multiplies the link quality to the received TQ value instead of calculating a minimum. Therefore for BATMAN IV the 5.9% lower TQ to GW2/GW3 created by the hop penalty will persist (as long as the hop penalty is not reduced / configured to a lower value).

Node N1 could detect that it knows a better gateway than the one N2 has selected: It could check the DHCP messages send by N2 via a batman-adv unicast frame and rewrite its destination to GW1.

A gateway server, here GW1, could check if it is about to forward a unicasted DHCP message to another gateway server. And if so, refrain from forwarding and deliver it to its own bat0 instead.

Issue: A DHCP client sends multiple messages to a DHCP server. We might break the DHCP handshake if the routes switched in between the handshake.

Issue: The gateway announcement TVLV handler is called with BATADV_TVLV_HANDLER_OGM_CIFNOTFND. If a node were receiving OGMs from two different neighbors where one would have the gateway announcement TVLV and the other one wouldn't then this would lead to gateway selection flapping with each received OGM. The BATADV_TVLV_HANDLER_OGM_CIFNOTFND would need to be removed and replaced by a timeout. Which however would lead to reduced responsiveness / delays if a gateway disabled its gateway server mode. And more importantly, it would break compatibility, it'd need yet another TVLV/flag to propagate this capability. And only if all nodes were announcing this capability nodes could change their behaviour.

Another issue is that it might render the stickiness client option void if for a forwarding node the gateway with the highest path throughput switches often. Which would lead to gateway flapping for gateway client even if it set a selection class / stickiness.

A gateway is considered "best" for keeping the flag set if:

Question: Should we re-set the flag when receiving a gateway announcement with the flag unset if it is our best gateway via a different neighbor? Or would we avoid resending this OGM anyway due to how the BATMAN algorithm works?

General issues with filtering or flagging:¶

While currently BATMAN V only takes the announced download bitrate into consideration, if a gateway client would want to select the best gateway by upload rate in the future that information would not be available anymore. In other words, a forwarding node might have other criteria for its best gateway than the final gateway clients.