To transport packets through the mesh network, batman-adv prepends its own header to packets entering the mesh. Since clients and other sources of packet don't know about this additional header, packets are often optimized for the usual MTU of 1500 bytes, meaning that the additional header increases the size to e.g. 1528 bytes. To handle this, batman-adv recommends users to increase the MTU of the wireless interface to at least 1528 bytes. However, some drivers/hardware don't support an MTU larger than 1500 bytes, or batman-adv might need to transmit big protocol packets, and for this we need fragmentation.

The size is checked in send_skb_to_orig() and if larger than the MTU of the selected outgoing interface (selected by bonding) the packet is passed to frag_send_packet(). Here, fragments are created and sent from the tail of the original packet, so that the first fragment contains the end of the original packet:

The first fragment is passed to send_skb_packet() to be transmitted and if the size of the remaining part of the original packet is also larger than the MTU, another fragment is created:

Now the remaining part is small enough to transmit in one piece, so the fragment header is added and the packet is passed to send_skb_packet(): 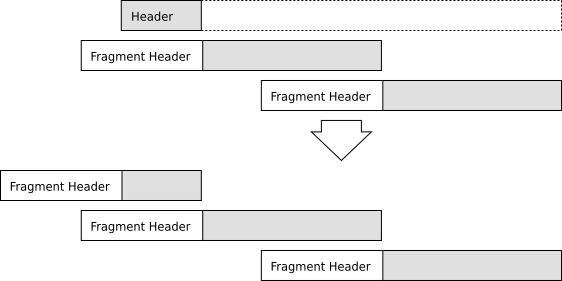 These completes the creation of fragments.

Fragments are identified by the packet type in the batman-adv common header.

When receiving a fragment, it is passed to recv_frag_packet() in routing.c, where it is either forwarded, buffered, or merged. Merged packets are passed to the primary receive function again and processed by its original handler.

First of all, fragmentation shouldn't be needed (except for tt-tables, see below). It is a fix for drivers/hardware that is unable to handle MTU's greater than 1528 bytes, it is slow (due to increase is packets), and is susceptible to packet loss.

It can be turned on and off via batctl:

If an intermediate node with an unexpectedly lower MTU exists, this scheme breaks. In the scenario "A <-> B <-> C", where A and C have MTU=1550 and B has MTU=1000 bytes, B cannot respond with nor forward very-big-full-tables from A to C. At the moment, batman-adv simply forwards the requests and hopes for the best.