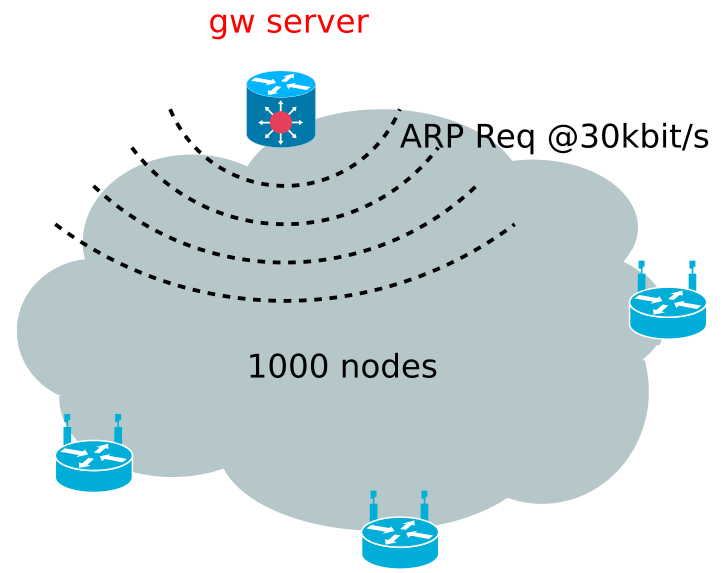 Many ARP Requests from a batman-adv gateway server

In larger mesh networks a significant (~30 kbit/s with ~1000 nodes) amount of ARP Requests can be observed. These are mostly broadcasted from nodes configured as a gateway and DHCP server.

The batman-adv Distributed ARP Table so far is unable to reduce the broadcast overhead for these specific ARP Requests from gateways.

The following statistics were gathered at Freifunk Ostholstein on one of their gateway servers. Their mesh network consists of 300 nodes. The statistics show some details regarding the ARP Requests this specific gateway (a2:d9:c8:47:67:5d) generated:

Focussing on the top statistics first:

Here there are two interesting points:

A) Nearly 90% of all ARP Requests this gateway sent were falling back to a batman-adv broadcast.

So it seems that there were some necessary and successful broadcasts. But the larger portion did not help in resolving the address.

The more detailed timing statistics indicate that of those unanswered ARP requests more than 95% are clients which were resolved successfully before.

Freifunk networks are open and highly dynamic regarding their clients devices. A bus stopping near a Freifunk node might easily create a few dozen new connections and participants. And those ones will vanish shortly after.

Such dynamics might explain a large amount of unanswered, but previously successful ARP Requests.

The DAT_ENTRY_TIMEOUT is currently 5 minutes. Since ARP usually does not proactively send unsolicited ARP Replies there needs to be some ARP Request to query a client to refresh the DAT DHT.

So even if a client device has a stable IP and position it will likely result in a broadcasted ARP Request every five minutes.

The first patch provides an alternative to filling the DAT DHT: It allows learning IP-MAC pairs not only via ARP spoofing but DHCP spoofing, too. The advantage is that for DHCP we already have the gateway feature which always uses unicast transmissions.

The second patch allows to prevent forwarding a frame which batman-adv would otherwise flood. With a DHCP snooping in place and a lease timeout lower than the 5min. DAT timeout ARP Requests for addresses in the DHCP range can safely be dropped. The noflood mark can be configured like:

The following picture shows the amount of broadcasted ARP Request traffic before and after applying and configuring these patches at Freifunk Darmstadt (800 batman-adv nodes): 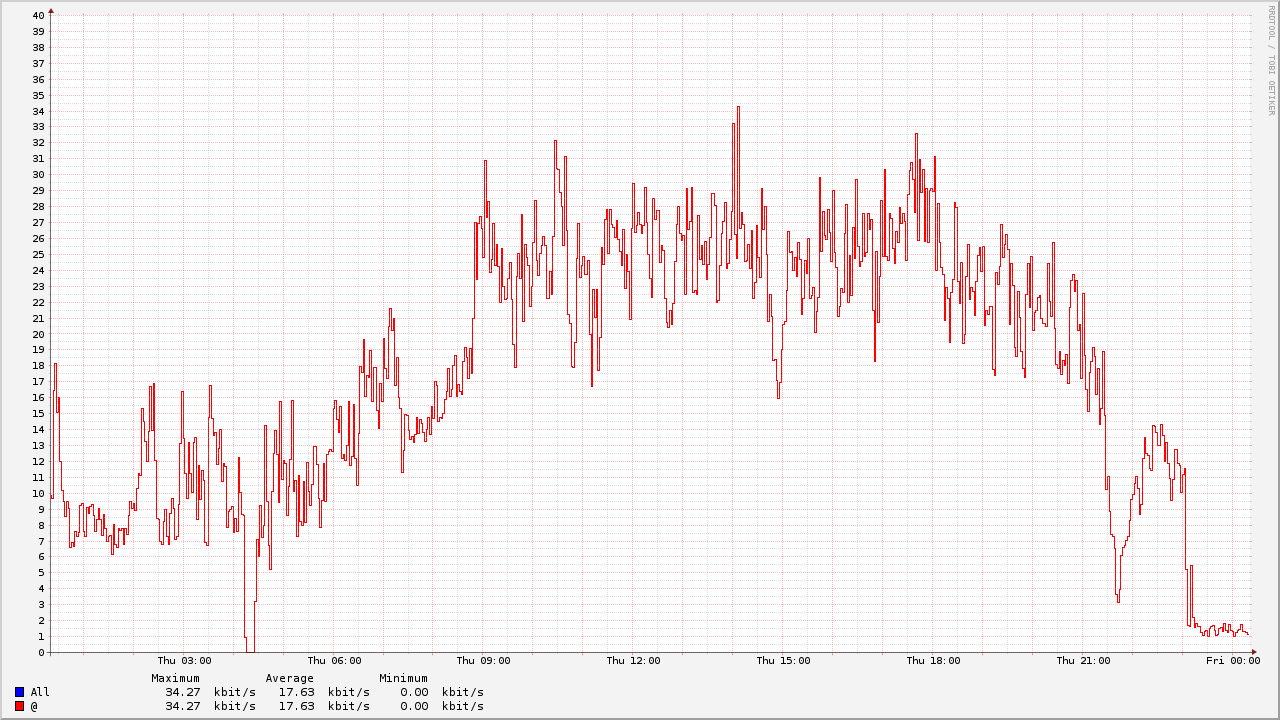 At about 23:00 this feature was enabled in their network on all gateway servers. Since then it is running there with no issues reported so far.

A month later it still looks like this (note the scale): 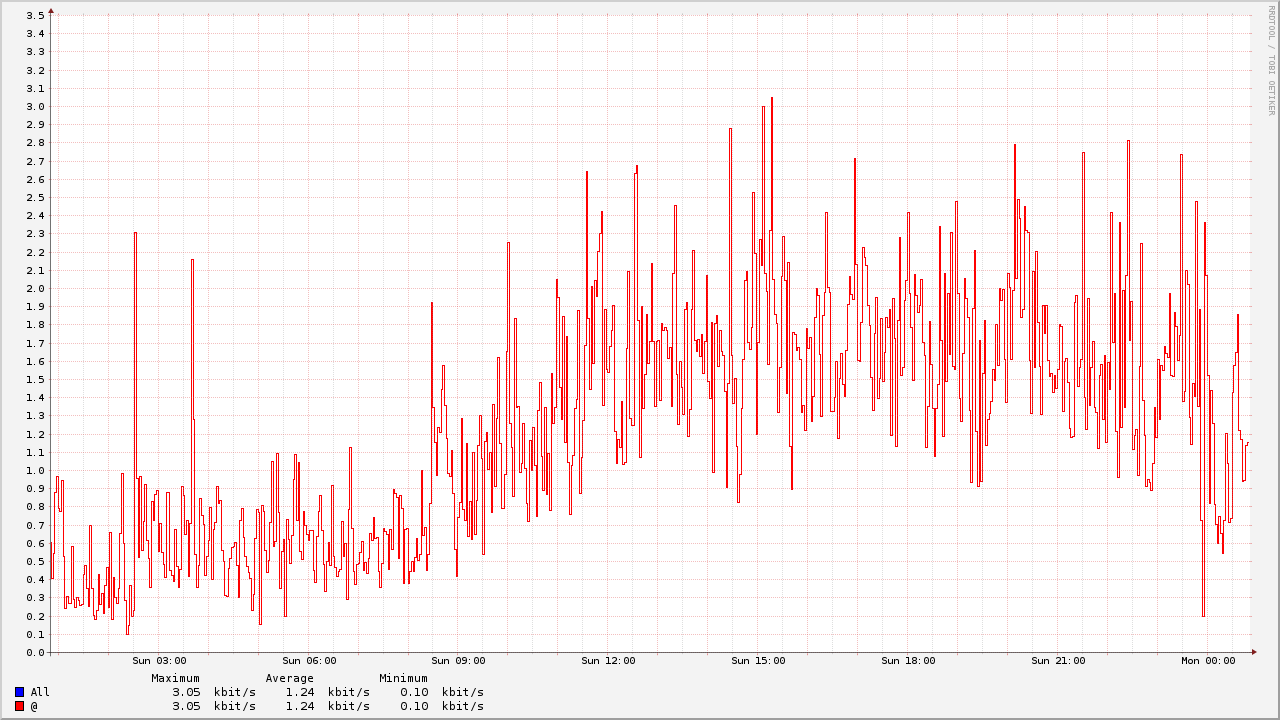 And the result (daily average) in relation to other layer 2 broadcasts: 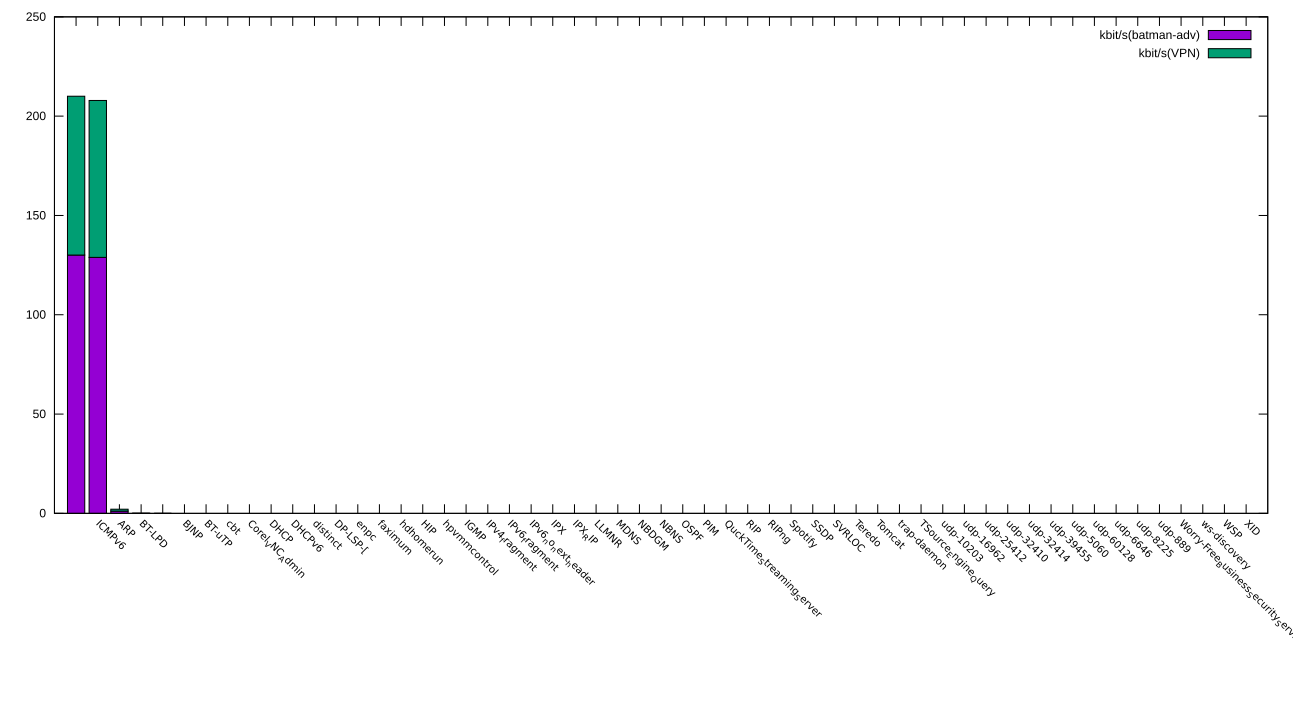