A scenario which is becoming more and more common in mesh deployments is the existance of two or more batman-adv clouds interconnected via Layer3 routing.
This is a normal consequence of the hierarchy introduced into a network in order to make it scale.

A batman-adv cloud is a set of nodes which are all using batman-adv and so they are all sharing the same broadcast domain (meaning they are all in the same subnet). Many of these clouds can then be interconnected by means of Layer3 gateways which do usualy run a different routing protocol aimed to find the best Layer3 path between the source and the destination cloud.

A very common situation can be the one depicted in the following picture, where one cloud may have more than one Layer3 exit point with different costs towards the final destination. 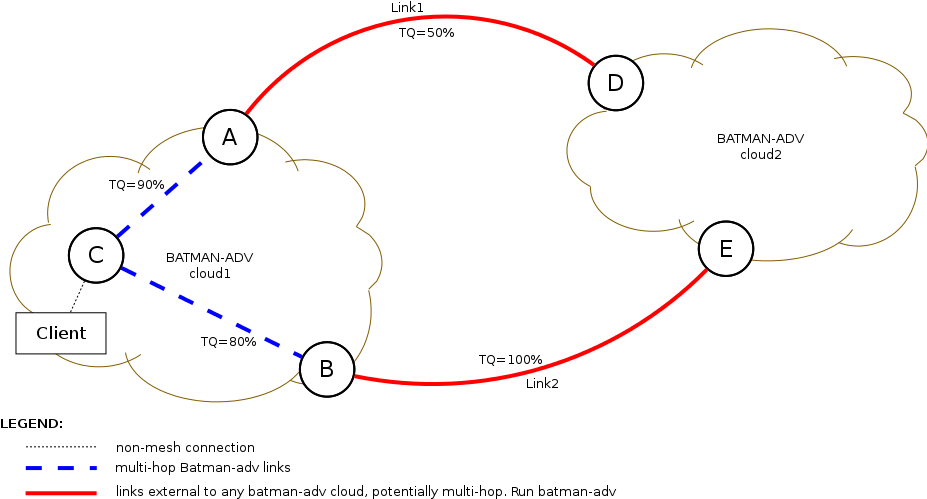 Node A and B are the two possible exit points from cloud1 towards cloud2, while D and E are the two cloud2 entry points. In the normal Gateway scenario batman-adv would choose the gateway which is reachable through the path with the Best TQ. In the picture node C would choose A because the TQ towards it is 90% while towards B it is 80%. This seems to be the best choice because this way batman-adv is minimizing the probability of packet loss till the gateway, but it is not considering the rest of the path behind it towards the real destination: cloud2.

Looking at the scenario with more attention it is possible to understand that choosing B as exit point is better because the resulting overall qualities are the following:

Given these results it is possible to understand that the best local choice (node A) would result in a worse overall path towards cloud2.
This conclusion lead to the problem that the local available information in a batman-adv cloud is not enough to make a proper decision at the source (node C).

Injecting into the batman-adv cloud information about the external links can result in the possibility for any batman-adv node to compute the overall metric towards the selected destination (e.g. cloud2) and so to choose the "real best" exit point .

Imagine that in the scenario shown in the previous picture node C knows about the TQ between A and D and between B and E: it would have chosen node B because it minimize the overall packet loss towards its destination (cloud2).

To implement this concept batman-adv needs:

For 1 we use L2 anycast, a particular GW tvlv with subnets announcement, a TT_CLIENT_GW flag, a virtual GW table, possibly DHCP and L3 routing daemon interaction.
For 2 and 3 we use batman-adv on the external link as well. This give as a metric which can be easily combined into the batman-adv cloud (the metric inside and outside the cloud are the same and can be combined with the classic batman-adv schema).

L2 Anycast consists in assignng the same MAC address to two different non-mesh clients and in leaving to batman-adv the decision of which one should be contacted.
Batman-adv will choose the best path towards the client (which looks like being one only since the two hosts have the same MAC address) on a metric basis.

This mechanism works thanks to the Bridge Loop Avoidance II component which allows the same client to be reachable via different originators. The L2 Anycast exploits this feature by placing several non-mesh clients in the network having the same MAC address.
The result will be again that batman-adv will try to contact the client behind the best path.

Once the Layer2 Anycast has been settled each batman-adv node needs to know which are the external costs to be able to choose the "overall best" exit point. To do so batman-adv uses a new GW advertisement message which will contain the destination subnet, the MAC address used by the GWs and the cost towards the destination. This information is encapsulated in a proper TVLV, the Border GW TVLV.

Each border gateway sends one Border GW TVLV per subnet that it can reach via Layer3. The TVLVs are appended to the OGMs as already done for other capabilities, so that each node in the network can acquire such information.

All the information stored in the TVLV are stored in proper internal structures, in particular the MAC address is added to the Global Translation Table and marked with the TT_CLIENT_GW flag, while the cost to reach the network is appended to a Border GW table, specific for this subnet, where each entry represents a different GW with its own L3 cost.

This information is used by the selection mechanism explained later.

A first consequence of this mechanism is that each border gateway which is able to route packets towards a given subnet has to create a client configured with a MAC address which has to be the same on all the gws. A client can be created as a virtual interface on top of the canonical bat0: to do this the administrator can use the macvlan module as explained in the Layer2 Anycast section above.

The MAC address to assign to the virtual interface can be computed by a function SubMAC(Subnet) so that, given a subnet S1, SubMAC(S1) gives the same result on all the nodes. It is also important that, given two subnets S1 and S2, SubMAC(S1) is different from SubMAC(S2) for every pair S1 - S2, therefore SubMAC must be built on top of a robust hash.

Setting the second LSB in the first octect of the MAC to 1 (meaning Locally administered address) should ensure that no standard client device should have such MAC address (unless manually configured).

However, this is not really important from the batman-adv point of view, because it only needs that all the border GW routing traffic towards a given network share the same MAC.

For each external subnet reachable by a batman-adv cloud, there must be a unique IP which has to be used as GW by all the clients to route traffic towards such network.
This unique IP is used by the Anycast setup, therefore each border GW able to route traffic towards the given subnet must use the same couple IP:MAC (L3/L2 Anycast). This means that, whatever the number of border GW, the clients will install only one route per network.

A client willing to contact an host in a subnet different than its own tries to send its traffic to the GW defined in its routing table for that network. Given the assumpion explained above, the client gets the anycast IP from its routing table, converts it to a MAC using ARP, prepares the Ethernet frame using the latter address as destination and passes the packet to batman-adv.

Batman-adv at this point queries its Translation Table to get the address of the originator serving the destination client. In this case, thanks to the Anycast setup, there are more than one matching originator and therefore a decision must be taken.

As explained in the Anycast section, this situation is not new to batman-adv because when two or more nodes are connected through a batckbone LAN there are always shared clients reachable via all of them and this scenario is supported since the integration of the Bridge Loop Avoidance 2. In this case the best path is preferred and the orignator with the highest TQ is chosen as destination in the mesh.

Instead in this scenario the Translation Table knows that the client that batman-adv matches the MAC address of a border GW and therefore, instead of choosing the originator with the highest TQ, choses the originator which maximises the "overall path quality" towards the destination subnet by combining the TQ towards the GW and the cost towards the other network. This is possible because for each MAC address there is exactly one announced subnet and therefore the function in charge of picking the originator can look at the advertised costs (information that the local node got thanks to the Border GW TVLV) by each border GW and return the best.

The traffic is then routed to the chosen border Gateway and it will forward its over its external link.

As explained in the section before, a node willing to choose one of the available border gateways has to combine the TQ towards the GW with the cost from the GW to the network to be contacted.
This is not trivial since the semantic of the metric used by the L3 protocol might be totally different from the TQ.

To help in this direction the solution proposed here consists in using batman-adv on each external link connecting the border GW to any other node/network. This means that another instance of batman-adv can compute the TQ for those links. This information is then passed to the L3 routing protocol by means of a plugin so that it can use the TQ as its own metric (and possibly combine it with the TQ of all the links traversed between 2 different clouds).

At this point another plugin/script should push into batman-adv the information gathered by the L3 routing daemon (subnet - TQ) and so create the different Border GW TVLVs.