See here for a general description of the problem.

Especially in indoor scenarios like the one shown below where corners and thick walls are involved, hidden nodes can be a severe problem. Usually activating RTS/CTS is a common way of solving this problem at least to some degree. However, RTS/CTS can only be applied for unicast packets. Therefore a node C sending a lot of data packets to B, even with RTS/CTS those packets will interfere with BATMAN's broadcast packets (e.g. ELP packets or OGMs). The effect is, that with this stream, only the TQ from A -> B will decrease dramatically, the rest will stay relatively equal.

In the worst case, this can lead to route flapping to the shorter path, due to all these lost packets, A will switch its route towards C to the direct one if occasionally some ELP/OGMs had been received over this link, which might however not be usable for i.e. TCP traffic due to a too high packet loss. 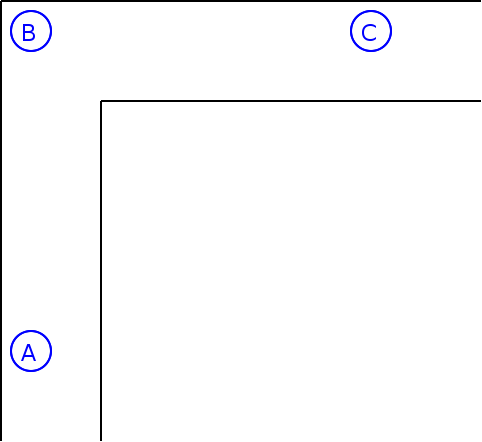 In BATMAN-Adv. we have the possibility to control not only the routing protocols control packets (like ELP packets or OGMs), but also the data flow. Furthermore the period when a node is sending an ELP packet / OGM is relatively constant (+ some jitter), which allows finding a solution which does not need an active channel reserving like RTS/CTS. Roughly the following steps could be done to decrease the number of lost control packets in case of hidden nodes:
Loading...