B.A.T.M.A.N. is a proactive routing protocol for Wireless Ad-hoc Mesh Networks, including (but not limited to) Mobile Ad-hoc Networks (MANETs). The protocol proactively maintains information about the existence of all nodes in the mesh that are accessible via single-hop or multi-hop communication links. The strategy of B.A.T.M.A.N. is to determine for each destination in the mesh one single-hop neighbor, which can be utilized as best gateway to communicate with the destination node. In order to perform multi-hop IP-based routing, the routing table of a node must contain a link-local gateway for each host or network route. To learn about the best next-hop for each destination is all that the B.A.T.M.A.N. algorithm cares about. There is no need to find out or calculate the complete route, which makes a very fast and efficient implementation possible.

On a regular basis every B.A.T.M.A.N. node broadcasts an originator message (or OGM), thereby informing its link-local neighbors about its existence (first step). Link-local neighbors which are receiving the Originator messages are relaying them by rebroadcasting it, according to specific B.A.T.M.A.N. forwarding rules. The B.A.T.M.A.N. mesh network is therefore flooded with Originator messages. This flooding process will be performed by single-hop neighbors in the second step, by two-hop neighbors in the third step, and so forth. OGMs are send and repeated as UDP broadcasts, therefore OGMs are flooded until every node has received it at least once, or until they got lost due to packet loss of communication links, or until their TTL (time to live) value has expired. In practise OGM packet loss caused by interference, collision or congestion is significant. The number of OGMs received from a given Originator via each link-local neighbor is used to estimate the quality of a (single-hop or multi-hop) route. In order to be able to find the best route to a certain originator, B.A.T.M.A.N counts the originator-messages received and logs which link-local neighbor relayed the message. Using this information B.A.T.M.A.N. maintains a table with the best link-local router towards every originator on the network. Unlike wired networks, WiFi setups often face the problem of asymetric links (Node A has a better connection towards Node B than vice versa). To ensure that the detected connections allow communication in both directions each B.A.T.M.A.N. node awaits rebroadcasts of its own OGMs from its neighbors within a certain timeframe (bidirectional link check). If the OGMs are not successfully retransmitted the connection is considered too asymetric (unusable) and therefore ignored.

The B.A.T.M.A.N. III algorithm has serious problems when it comes to asymetric links. The bidirectional link check tries to limit its impact but the result is far from being perfect. The timeframe in which B.A.T.M.A.N. accepts its own OGMs being rebroadcasted by its neighbor allows to tweak the behaviour. If this timeframe is rather short B.A.T.M.A.N. is very strict on choosing links. This may lead to many ignored links which might be usable in one direction. Only symetric connections will be considered. If the timeframe value is less strict B.A.T.M.A.N. will accept more links but tends to route in the wrong direction.

Example: OGMs from Node A propagate to B. The link is asymetric, therefore B receives all packets from A in contrast to A which receives almost nothing from B. As all the packets from A get to B the packet count at B's side goes up. B will assume that it has a perfect link towards A which is not the case. 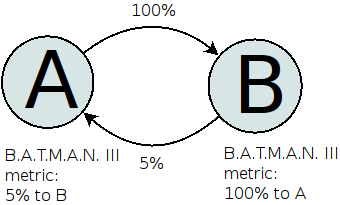 To overcome this flaw B.A.T.M.A.N. IV has been enhanced with the Transmit Quality (TQ) algorithm. The following sections are going to outline its design and how it strengthens B.A.T.M.A.N.'s routing capabilities in asymetric environments.

This shows that B.A.T.M.A.N. IV is able to compute the local Transmit Quality by using the same mechanisms as B.A.T.M.A.N. III without adding further overhead.

The local link quality needs to be propagated throughout the network to inform other nodes about the transmit quality. Therefore B.A.TM.A.N. IV introduces a new field called "TQ" which is 1 byte long. This field is added to the known B.A.T.M.A.N. III packet. Whenever the OGM is generated this field is set to maximum length (255) before it is broadcasted. The receiving neighbor will calculate their own local link quality into the received TQ value and rebroadcast the packet. Hence, every node receiving a packet knows about the transmit quality towards the originator node.

To add the local link quality in the TQ value the following calculation is performed:

Example: Node A broadcasts the packet with TQ max. Node B receives it, applies the TQ calculation and rebroadcasts it. When node C gets the packet it knows about the transmit quality towards node A.

B.A.T.M.A.N. IV can not always rebroadcast the newly calculated TQ that came with the latest OGM. Instead the TQ that was received via the best neighbor is rebroadcasted to support asymetric link scenarios better. 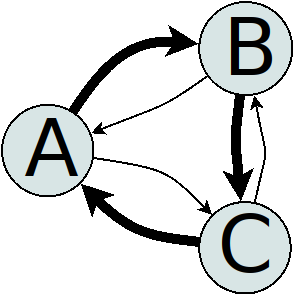 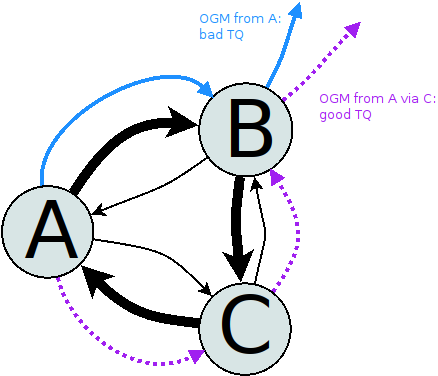 Therefore, B.A.T.M.A.N. IV will rebroadcast the received OGM with the TQ value of the best neighbor towards the originator. In the given example node B will place the TQ value received via node C in the message from node A before rebroadcasting it. It will flood its best TQ only. 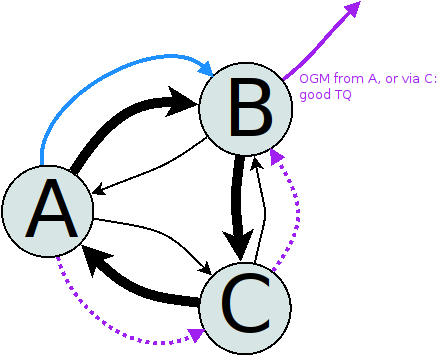 The calculation for the local TQ needs the OGM packet count of the neigbor and the own OGM packet count rebroadcasted by that very neighbor. Therefore a B.A.T.M.A.N. node has keep track of received packets over a certain interval. The slinding window size of these statistics is called TQ_LOCAL_WINDOW_SIZE.

The global TQ is an average of all received TQ values from one originator via a distinct neighbor. Packets with a TQ value of 0 also count as non-received packets. B.A.T.M.A.N. IV uses the sliding window size TQ_GLOBAL_WINDOW_SIZE greater than 1 to average the TQ.

Although the transmit link quality is most important decision factor B.A.T.M.A.N. IV also keeps track of the receiving link quality. On the WiFi layer every unicast packet has to be acknowledged by the neighbor node to approve the transmission. If this neighbor is not able to sucessfully send its ACKs the WiFi layer considers this transmission to be failed and tries to retransmit until it gives up. 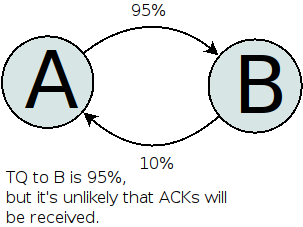 Thus B.A.T.M.A.N. IV needs to penalize links that have have a poor receiving link quality. To avoid a simple hysteresis which completely turns on or off a link, B.A.T.M.A.N. IV uses the function 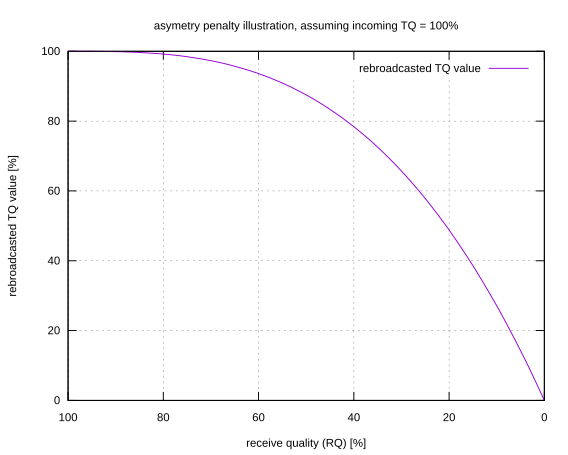 This obtained value is multiplicated on the TQ before it gets rebroadcasted. Neighboring nodes can weight the routing decision based on this information. In some situations the weak link is the only link available, so you want to use it, whereas in other cases better connections may exist. 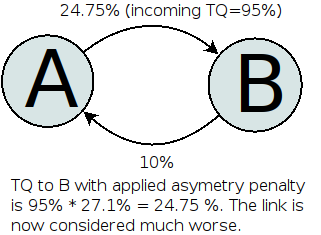 Example: 3 nodes (A, B and C) in a row (A can hear B but not C). Node A emits an OGM, Node B hears and rebroadcasts it. The broadcast from node B arrives at A and C. Node A will drop the message as A detects that it was the originator of this OGM. C will process and rebroadcasts the message. Node B will receive the very OGM that it sent before and happily rebroadcast again (the echo of its own message) because B can't detect that it broadcasted the message before.

Back to the example: Node B will ignore (drop) the packet coming back from node C as node C wrote the IP address of node B in the "previous sender" field.

Even in more sophisticated scenarios with more nodes/hops this concept successfully reduces the packets. It ensures that packet only travels paths which did not see this OGM before.

So far, B.A.T.M.A.N. IV focusses only on the link quality to evaluate paths but not on the number of hops in the path as it is unaware of the topology beyond its horizon. In certain network setups the link quality of the neighbors is very similar whereas the number of hops is not. In these scenarios it is very desirable to choose the shortest path to reduce latency and to safe bandwidth (on wireless mediums). The following section is going to illustrate the issue and how it is going to be addressed using an Ethernet network as example for the sake of simplicity. WiFi and other mediums are less susceptible as Ethernet but still affected.

Example: The nodes A, B and C that are connected to a network switch. Node A originates the first message which is received, processed and rebroadcasted by B immediately. Lets assume the rebroadcast from node B arrives at node C before the message from node A arrives. As the link quality is the same and perfect (in this example) Node C assumes a path towards node A via node B. 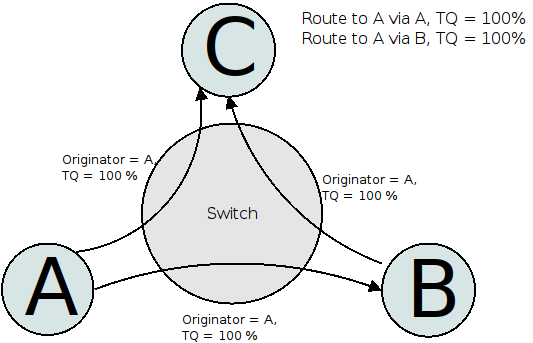 To overcome this issue B.A.T.M.A.N. IV introduces a hop penalty: Every time an OGM passes a node the TQ value will be decreased by a fixed value regardless of the asymetric link penalty before rebroadcasting the packet. In the given example it decrease the value of the route via node B and favors the direct connection. [penalty2 bild] 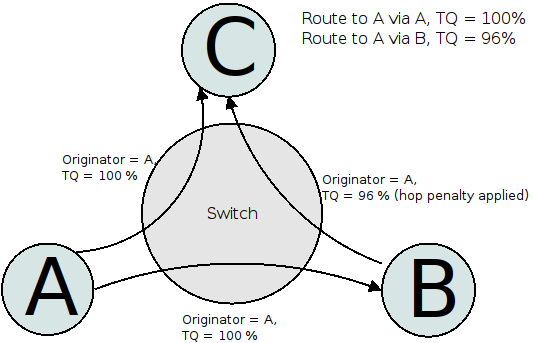 In dense node areas with low packet loss B.A.T.M.A.N. III generates quite some packets which increases the probability of collisions, wastes air time and causes more CPU load. Each OGM being 20 Bytes small, B.A.T.M.A.N. IV introduces a packet aggregation that combines several distinct OGMs into one packet. To achieve this B.A.T.M.A.N. IV holds back packets that are to be sent and waits for incoming packets to append them before broadcasting the single aggregated packet.

B.A.T.M.A.N. IV allows to append none, one or multiple HNA messages. As each OGM may carry multiple HNA information it is necessary to store the number of HNA messages in the newly created HNA length field.

The detection process: Node A emits an OGM without any enabled flags. The neighbor B receives the message and checks whether the UDP sender address and the originator address are equal. If so it will rebroadcasting the OGM with the direct link flag enabled otherwise the flags are not changed. Once node A receives this rebroadcast of its own OGM it recognizes this neighbor as single-hop neighbor due to the existing direct link flag. If node A received this package via the same interface it was sent out (incoming interface address equals originator address) node A will accept this package and increase the the Echo Quality (EQ) packet count. Its ignored otherwise.

Examples: Node A hast 2 interfaces and broadcasts the OGM of one interface over both interfaces to make it known in the mesh cloud. Node B also has 2 interfaces and receives this broadcast via both. The OGM that orignated via the interface it belongs to is accepted to other one ignored (for further interface detection).