alfred is a user space daemon for distributing arbitrary local information over the mesh/network in a decentralized fashion. This data can be anything which appears to be useful - originally designed to replace the batman-adv visualization (vis), you may distribute hostnames, phone books, administration information, DNS information, the local weather forecast ...

Typically, alfred runs as unix daemon in the background of the system. A user may insert information by using the alfred binary on the command line, or use custom written programs to communicate with alfred directly through unix sockets. Once the local data is received, the alfred daemon takes care of distributing this information to other alfred servers on other nodes somewhere in the network. As addressing scheme IPv6 link-local multicast addresses are used which do not require any manual configuration. A user can request data from alfred, and will receive the information available from all alfred servers in the network.

More user related information can be found in the alfred overview page.

An alfred network used for exchanging data is built using different nodes running an alfred server. Servers are detected and connect to each other automatically. 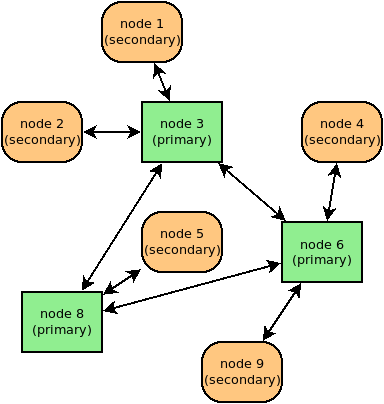 Such a network has to contain at least one primary server. Primary servers are used as global data storage and help to synchronize data with other nodes. This role is so important that they actively announce there presence to all nodes. Other primary servers are automatically synchronizing their stored data to have it distributed to all reachable primary nodes.

All communication between servers in an alfred network is done through IPv6 link-local UDP messages. This only allows communication in the current subnet but messages will not be routed between different subnets.

The underlying layer can for example be batman-adv which makes all nodes in a mesh look like being connected to a big switch. This makes it possible to reach all nodes even in situations where they would not be able to reach each other through the actual link medium. Therefore, link-local messages are enough for this scenario. Deployments with a different kind of underlying layer may have to evaluate if they can provide a medium which also provides IPv6 link-local communication between all nodes.

The primary server will announce itself using IPv6 link-local multicast messages. This makes it possible to reach all nodes with a single message unless it is dropped while being forwarded/transmitted. 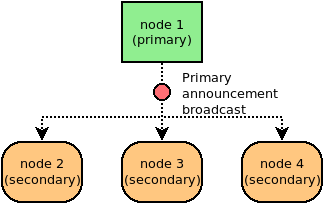 The periodically (10s) transmitted announcement multicast messages will be received by the other alfred servers and be store for later. Primary servers use this information to synchronize data and secondary servers use it to have access to the global data. 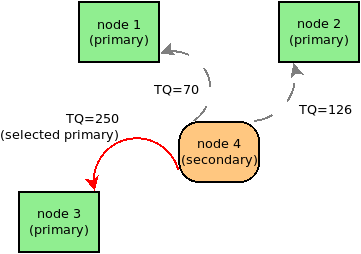 The mac address is used by alfred to associate the messages with an unique data source. It is calculated by evaluating the received UDP/IPv6 packet source address. This mac address can then be used to retrieve the primary server TQ from the batman-adv debug tables.

Detected neighbor servers are automatically dropped after a timeout of 60s since the last announcement was received.

The client communication to the alfred server is done through unix sockets on the same node. The path is defined as /var/run/alfred.sock

The used packet format is shared between the server2server and the client2server communication. There are some minor differences which will be explained later.

The easiest communication is the push of data to an server. The client has to create a alfred_push_data packet with the attached data at the end. The server receives it, stores it, closes the client connection and handles the forwarding of the data to the other servers in the alfred network.

Slightly more complicated is the request of data from a primary server. The client has to send an alfred_request packet to the primary server with the type it requests. The reply will be an arbitrary number of alfred_push_data packets of the requested type which contain the data set by the clients on this node and from other nodes. The data from other servers will only be as new as the latest successful data synchronization. 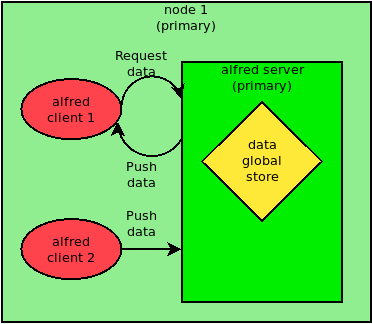 This request can fail for different reasons. The secondary server uses an timeout (10s) for these requests and informs the client using an alfred_packet_status error message that the request failed. Otherwise the secondary server will reply with alfred_push_data packets the same way as a primary server. 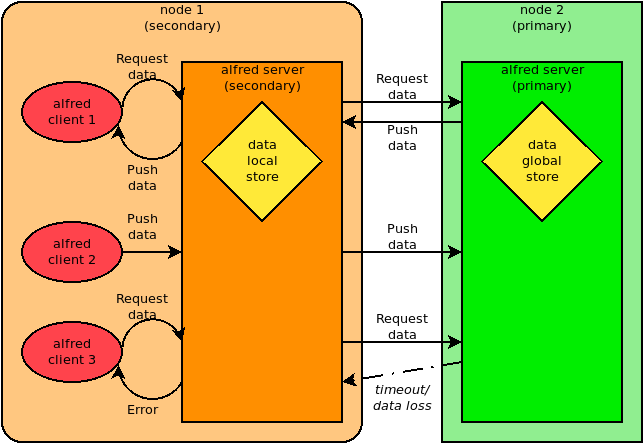 The best practice for a client is to implement the handling of error messages even when it is only used together with primary servers.

Data synchronizations are done primary2primary and secondary2primary. The secondary will only send data from its clients to a single server. Primary servers are sending their stored data to all other known primary servers. This only contains the data from their local clients and data pushed from secondary server. 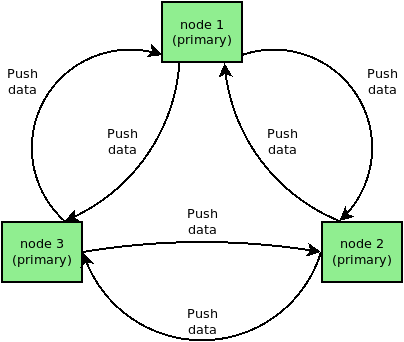 Data is automatically pruned from the server storage 600s after the last time it was received/refreshed.

The data stored in the packet headers is always stored in network byte order (big endian). The packet format is TLV based (type, value, length) which appears in different headers. The type is only defined by alfred for the outer TLV and can be PUSH_DATA(0), ANNOUNCE_PRIMARY(1), REQUEST(2), STATUS_TXEND(3), STATUS_ERROR(4). The only special type is MODESWITCH(5) which is used internally to switch a server between primary and secondary mode.

The length value is always the length of the payload following the TLV. This is especially important when multiple TLV + payload blocks appear after each other.

The version field is also only defined for the outer TLV and has to be 0 for the specified first packet format.

The announcement is only done by the primary servers to announce themselves via link-local UDP/IPv6 multicast. It doesn't contain any more information. The receiver has to calculate the mac address of the sender by decoding the link-local IPv6 sender address.

Requests are done by clients via unix socket or by secondary servers via link-local UDP/IPv6 unicast.

The requested type is the type of data which the transmitter wants to receive. The alfred_push_data packets sent as reply must only contain data blocks from this type.

The transaction id must be unique during the time the request is made and answered.

Secondary servers send error messages via unix sockets to clients. This tells the client that the request of data from the primary server failed. The transaction id has to be same as the transaction id of the alfred_request packet.

The only currently used error code is 1.

Push data packets are sent/received by clients to send data via unix sockets to/from servers. Clients send it to store data on a server. Servers send it to clients as answer to alfred_request packets.

Servers sent push data packets via UDP/IPv6 to synchronize data between them. Primary server also sent them to secondary server as answer to alfred_request packets. 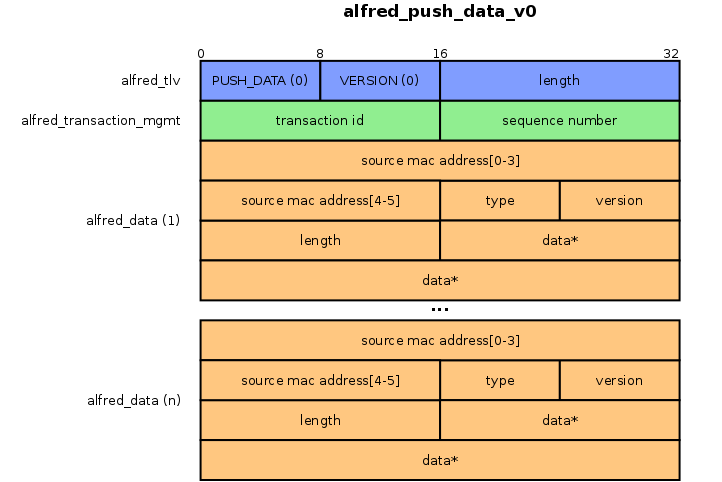 The payload of the alfred_push_data packet after the transaction information is split into an arbitrary number of alfred_data blocks. Each data block is started with the mac address of the server which initially stored the data. The next part is the TLV header which describes the data part of the alfred_data block. The type and version are user/client defined. The length is the number of bytes for the data stored after the TLV header.

Alfred allows type from 65 up to 255 as general types for client data. 0 - 64 are reserved (e. g. batadv-vis(1) and alfred-gpsd(2)). The version information has to be evaluated by a client to make sure that it can correctly interpret the data.

One push data packet can be up to 65535 bytes in size. This limits the number of bytes per data block to 65517 bytes.