The first steps towards Network Coding

Early 2011 we were approached by 2 Danish students who were intrigued by the idea of implementing & exploring a concept called "Network Coding". A technique aiming at an increase of the WiFi throughput by aggregating multiple frames into a single frame, thus reducing the needed air time. With the help of mathematical calculations and some additional magic the receiving nodes would be able to decode & extract the frame they are interested in.

In the example illustrated below, the repeater R can save one transmission by sending the combined messages of A and B. A and B can calculate the message they want to receive by subtracting their own sent message. 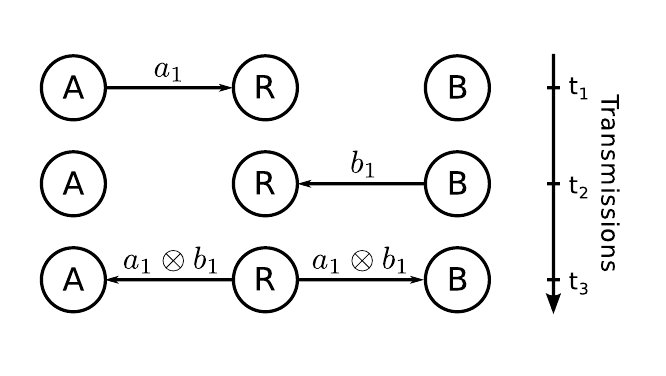 Later in March the students joined the WirelessBattleMesh in Spain and gave a short introduction talk about their project which they named "C.A.T.W.O.M.A.N." (Coding Applied To Wireless On Mobile Ad-hoc Networks). The recorded talk discusses the mechanisms and benefits of Network Coding and should provide a good starting point to understand what this is all about.

Meanwhile they have continued working on the code and developed a first prototype which allowed gathering data about whether or not the concept brings benefits in the real world. The following graphs illustrates the throughput in kb/s with and without network coding (blue and greenline respectively) as well as the throughput gain (red line) achieved by network coding on a chain of 3 routers with clients attached to each end: 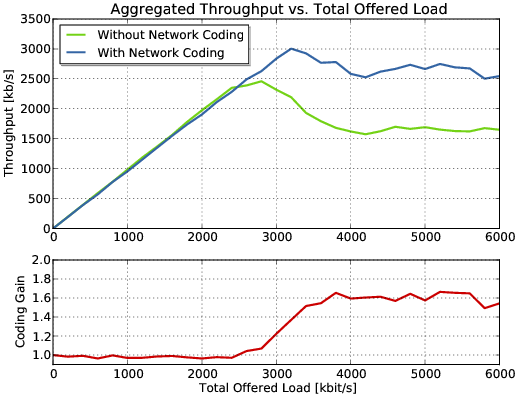 As the entire project was to become their master thesis it comes with an excellent documentation explaining every last detail of how it works and resulting performance analyses.

[update] Meanwhile the Network Coding project and its code has moved to git.open-mesh.org (catwoman branch), was rebased on the current master and further improved. An OpenWrt integration was also added to make testing easier. [/update] This should enable all interested parties to further test & extend the Network Coding concept.