Added by Marek Lindner over 12 years ago

After the 2 successful WirelessBattleMesh gatherings in 2009, the interest in CommunityWireless events with focus on meshing and idea exchange was growing and resulted in the 3rd WirelessBattleMesh. Due to lack of time and space to deploy a decent test network during previous events, we decided to get together at the camping site in Bracciano / Italy. The owner was a big fan of the FOSS movement that allowed us to deploy the nodes wherever we wanted and helped us in many occasions. The persons from Ninux made sure we had all the things we needed (for example a broadband symmetric wireless internet uplink across the lake) and managed to make this event a great success. Thank you!

We managed to flash, configure and deploy roughly 40 nodes (in a rather random manner) across the camping site. All nodes ran 5! routing protocols simultaneously, thus creating quite a "wifi warzone". The good news is: All protocols ran without major problems - we had no crashes, memory problems, etc. Some people were measuring protocol traffic, cpu overhead and so on which were published towards the end of the event. This is a major step forward, since the previous events never managed to get a big test bed running to perform these kind of tests. Unfortunately, this test bed was rather chaotic and delivered unreproducible test results. If the same test was performed twice with a 5 minute pause in between the results were totally different. We hope that future events will focus on a more predictable environment. 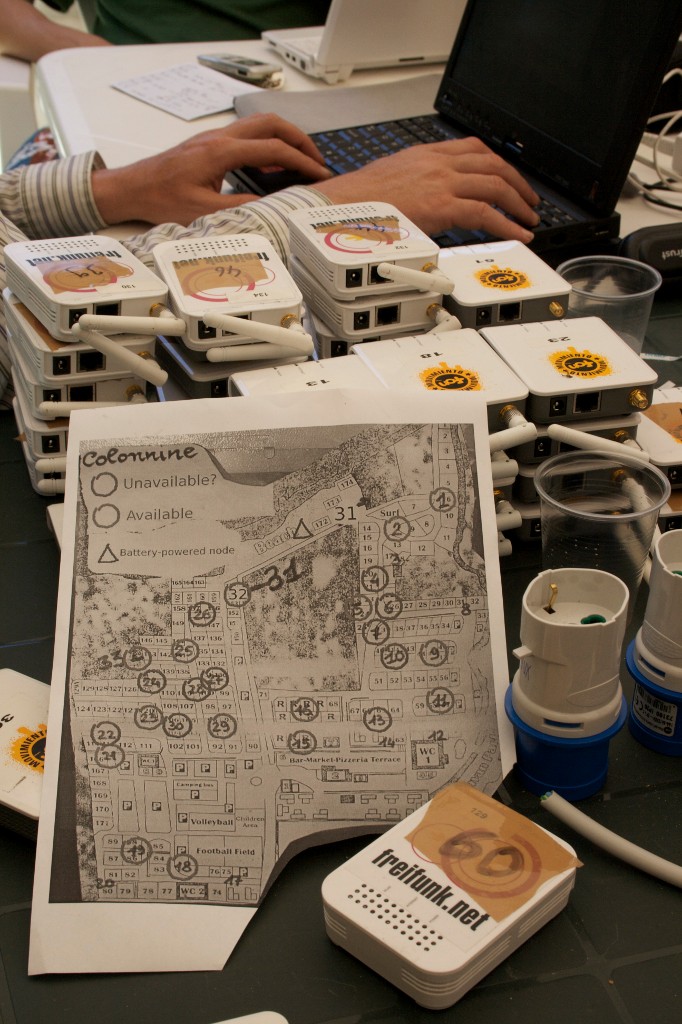 Map of the camping site with node positions (photo by hispanic)

For us batman developers it definitely was a worthwhile event. Apart from meeting a lot of interesting people from other projects we also met some of the Italians who wrote papers about the B.A.T.M.A.N. protocol. As we noticed recently our protocol became quite popular in Italy (go to google scholar and see for yourself), so we used the chance to see some of the faces and chat about future improvements & collaboration. Some cool things might show up over the next couple of months. Furthermore, we had the time to discuss our release cycle. The result of this discussion can be read here.

Next to the "regular" testing we organized some specialized batman tests on our multi-radio wifi hardware. Since a while a new feature called "alternating/bonding" is in preparation which needed some more testing before it could be finalized. The idea of this feature sounds simple: Using multiple (wifi) interfaces to avoid the bandwidth killing store & forward mechanism which one usually encounters when forwarding traffic over multiple hops on the same channel. First, batman would have to detect that the other end has several interfaces connected to the mesh. Then this could be used to send data to one interface and forward it via another one (which we call alternating) or use both interfaces to send & forward at the same time (which we call bonding). If you are interested how the protocol detects it, please see this document. 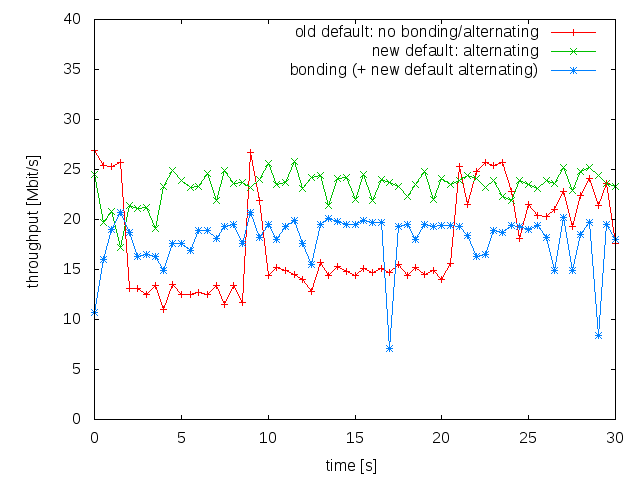 This graph shows a 3 node setup each with 2 802.11abg wifi interfaces connected to the mesh network (1x 2.4GHz and 1x 5.8GHz). As you can see the alternating mode is able to maintain the performance. The old default behavior sometimes manages to maintain a similar level of performance but is rather unstable.

As the alternating mode proved to be so effective, it will be activated by default (if multiple wifi interfaces are available). This feature will be part of the September release but if you want to test it now, check out the trunk and let us know about your results!

We are looking forward to the Wireless Battle Mesh v4,