When forwarding packets in a wireless mesh network, airtime can be saved by exploiting the information already present at the destinations of a forward. One way of doing this is Network Coding, where two packets are XOR'ed together before transmission. To extract one of the included packets, the destination must simply XOR the network coded packet with the other included packet:

For more information about the concept, read the NetworkCoding introduction.

The implementation is based on 5 steps:

Each step is explained in detail in the following sections.

1. Detect neighbors in range of each other¶

A relay node exploits the TTL field of OGMs to detect when two neighbors are in range of each other:

Node A emits an OGM, which is received by Node C and Node R. 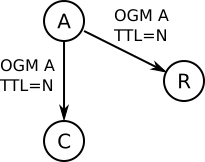 Node C decreases the TTL retransmits the OGM from Node A. The OGM is again received by Node R, who compare the TTL of the two received OGMs. 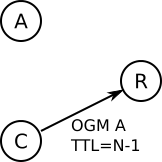 If the difference if only 1, Node R can conclude that Node C is in range of Node A.

2. Hold back unicast packets before forwarding¶

Whenever a unicast packet is ready to be forwarded, it is passed to the network coding system, where it added to a buffer (only if not coded with an already existing packet). The buffer is organized as a hash table with entries of src-dst pairs. Each entry has a linked list with packets that all come from a specific previous hop and are directed to a specific next hop (which is decided by the routing part of batman-adv). The linked list works as a FIFO:

A worker function traverses the list periodically and transmits timed out packets. The timeout is by default 10ms.

Before adding packets to the forward buffer, the buffer is searched for opportunities to network code. The algorithm to find such opportunities takes its starting point in the packet currently being added to the buffer, say /p1/:

4. Save overheard and transmitted packets¶

To be able to decode network coded packets, a node must possess one part of the coded packet. This is achieved by buffering both packets originating at the node and packets overheard by the node. The buffer is structured in the same way as the forward buffer in step 2, which makes is fast to search for decoding packets. To overhear packets from other nodes, the wireless interface must be put in promiscuous mode.

To identify the packet needed to decode, the receiver uses the source of the network coded packet, and a field in the header with the address of the sender of the original packet. These addresses are used to create a src-dst pair, which is used to locate the correct entry in the hash table, in which the packet list is searched for a matching CRC, which is also given in the header of the network coded packet.

When the needed packet is located, its data is XOR'ed with the network coded packet, and the original unicast header is restored so that it can be processed as usual by batman-adv.

The header of a coded packet is rather large, as it has to carry the information needed to identify the packet needed to decode and restore the headers of the two decoded unicast packets:

Explanations of each field:

A field "first_dest" (address of the first receiver of the network coded packet) is not needed because it is already present in the mac header following the network coding header.

The header can be logically divided into two main parts: One part for each of the combined packets. For each packet, the header specifies the destination (although the first destination is given in the MAC header), the previous source, the final originator destination and a CRC32 checksum of the packet.

After identifying the right packet and decoding, the receiver reconstructs the original unicast header with the fields from the network coded header. E.g. mac_dest, mac_src, ttl, ttvn, orig_dest.

There are few ideas that could make the implementation of network coding perform even better:

Although network coding can provide a significant gain in throughput, there are a few limitations, which should be known:
Loading...