This feature is an extension of the existing AP-isolation that aims to improve the old mechanism while keeping a backward compatible behaviour.

When the extended-isolation is enabled batman-adv drops all the wirelsss-to-wireless traffic and at the same time marks clients as isolated based on the user configuration.
This way batman-adv provides a mechanism to achieve the following goals:

How to recognise isolated clients¶

In the classic AP-Isolation mechanism clients are marked as WIFI when packets originated by them reach the batman-adv interface after having being received on a wireless interface.
With the Extended-isolation instead the idea is to classify as isolated every client which packets are (fw)marked with a given value. This increases the flexibility of the whole mechanism since the user can setup any creative firewall rule to make the host mark packets only when matching particular conditions.

A simple use case might be to mark all the packets coming in through a given interface by using tc:

With these commands, all the the packets coming in through eth1 will be marked with the fwmark 0x6.

The next step it is to configure batman-adv properly, meaning that the user must tell the kernel module which is the value to match in the skb->mark field when detecting isolated clients.

As reported in the example above, the isolation mark needs to be configured in batman-adv in the form VALUE/MASK in order to keep the mechanism as flexible as possible.
The fwmark value attached to a given packet can be (and usually is) used by several components in the kernel and therefore, to avoid colliding and breaking those other mechanisms, batman-adv should work only on a limited number of bits within this field. The MASK part is a (hexadecimal) bitmask representing which bits batman-adv is allowed to work with, while the VALUE represent the real value that has to be used. Due to the restriction given by MASK, the VALUE is altered in order to avoid touching any bit that is not selected by the former.

How to transfer the mark from node to node¶

The previous sections explained how to detect clients that have to be marked as isolated, but how is this information passed to other nodes in the network?
Clients recognised as isolated are marked with a special TT flag, namely TT_CLIENT_ISOLA, which is then spread all over the network with the rest of the TT information so that other nodes are aware of which global client has to be considered as isolated.

Now that all the nodes in the network have the needed information there are two possible scenarios:

Note that each node could have its own isolation mark and there is no need for them to be the same.

How to drop broadcast traffic¶

Following the example reported in the previous sections, a set of tc commands can help to drop all the broadcast packets having been marked with a given fwmark:

With this instructions two task are accomplished:

Note that tc is used instead of iptables because the latter would only be able to work on frames carrying IPv4/6 packets, while in this case the target is the entire traffic.
However, any kind of rule interacting with the fwmark can be used to implement any wanted behaviour. 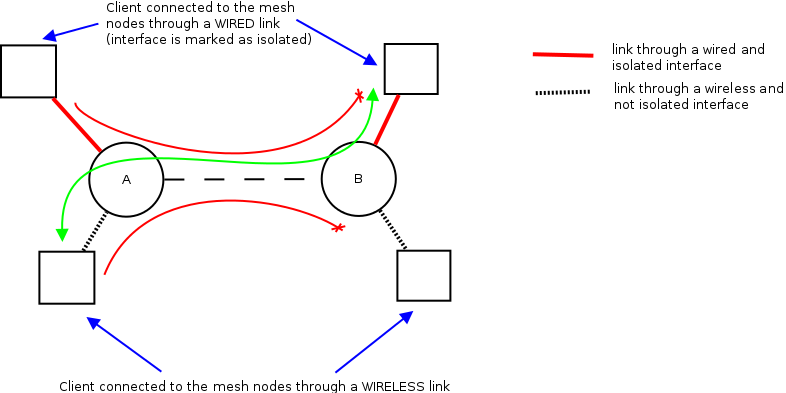 In the picture above traffic is allowed only between the wired and the non-isolated wireless interface (both the interfaces must be "isolated" to block the traffic).
Wireless to wireless traffic is blocked due to the already existing AP-isolation mechanism, while between the two wired "isolated" interfaces there is no communication because of the new Extended Isolation feature described in this page.