Status: Patches available, not upstream yet

While the concept of rebroadcasting OGMs and broadcast packets is a simple, resilient way to spread information, there are certain scenarios where this approach can be suboptimal, leading to potential congestion. 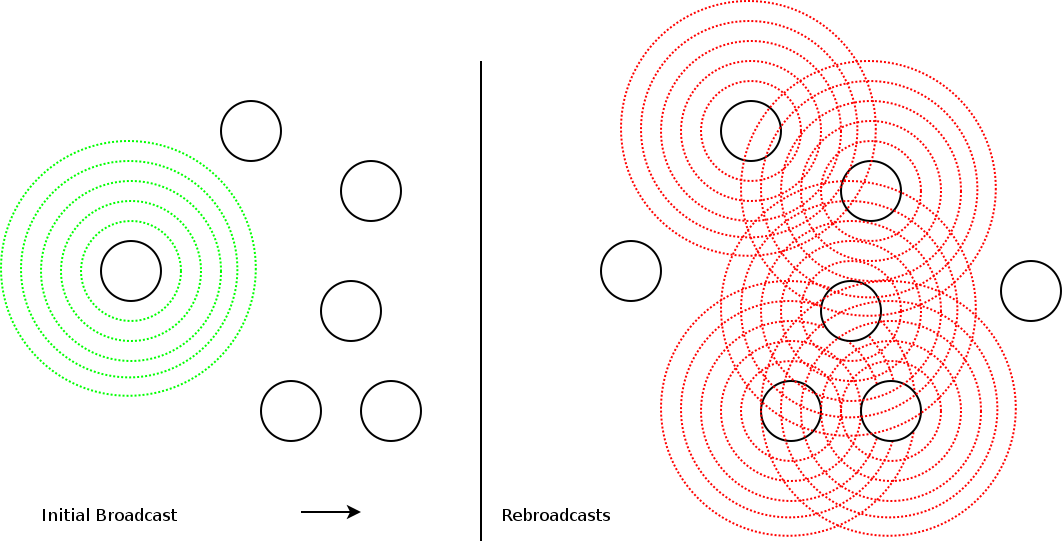 The main disadvantage of this approach is, that the number of such messages / overhead increases significantly with every extra, neighboring node on an interface. (O(m*n), n = amount of direct neighbors on an interface, m = amount of "originators" [approx.: m = #nodestotal for OGMs, m = #clients for broadcast packets])

There are certain cases where rebroadcasts are unncessary. This page describes mechanisms to detect some common ones to avoid rebroadcasts and by that reducing the OGM and broadcast packet overhead. (O(m*n) => O(m) )

Here are a few scenarios that the protocol additions described later are supposed to improve:

Many mesh nodes wired to one, big switch

Within buildings it is often easy to deploy at least some cables, or several spots have cabling and patch panels already available. For larger indoor setups it is often advantageous to use at least some cable connections to increase throughput, reliability and available wifi airtime, while keeping wireless mesh routing for difficult spots, mobile nodes or flexibility purposes.

Thanks to the generic design of batman-adv, that is you can configure it on any ethernet interface you like, you can do just that: Run batman-adv on a mix of both wired and wireless interfaces. However, the current rebroadcast approach bears some limitations:

A mesh network of 8 nodes all connected to each other via one 8 port switch would create 16 times the OGM overhead compared to just two nodes. For 24 nodes, this factor increases from 16 to 144 - thanks to rebroadcasting.

However, in this scenario, actually no rebroadcast would be necessary: On a switch a broadcast always reliably arrives on all attached devices. All devices connected "see" each other on their network interface directly, usually with the same full-duplex link speed even.

B) Gathering of Mobile Nodes¶ 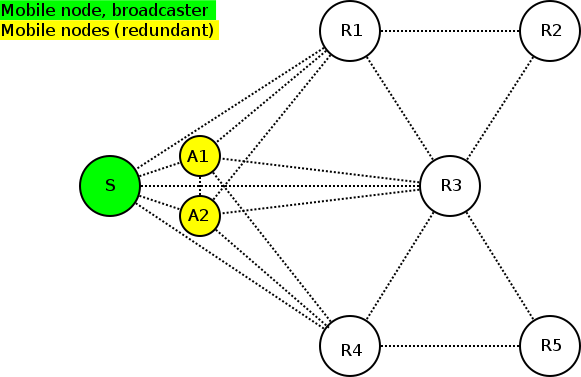 Nodes close to each other involving similar wireless hardware usually do not provide any better routing options. Therefore it might be unnecessary or even undesirable to have nodes in close proximity to the original sender to rebroadcast OGMs and broadcast packets. This is especially true when taking the half-duplex nature of wireless interfaces running on the same frequency into account, too.

A peer-to-peer tunnel over an asymmetric DSL link

Some wireless community mesh networks try to interconnect their wireless mesh clouds over common DSL connections. For that they provide tunnel servers relaying the traffic.

Unfortunately, ADSL usually provides limited upstream bandwidth. And for larger mesh communities, the protocol overhead can be quite significant.

Rebroadcasting the large amount of protocol messages coming from the tunnel server on the tunnel client side can lead to a congested ADSL upload.

When a node sees just one or no neighbor on a specific interface, then the following, simple rules can be applied to avoid broadcasts on this interface:

We can avoid sending a packet into the void.

Three nodes with a single neighbor per interface each

We can avoid echoing a packet back to the node it originally came from.

A node avoiding to echo back to its forwarder

We can avoid echoing a packet back to the originator node (not just neighor) it was forwarded from.

The following approach is supposed to mainly improve scenario A) (while improving scenario B) in some specific cases).

If either (or both):

Then a rebroadcast can be avoided.

If either (or both):

Then a rebroadcast can be avoided.

For smaller neighborhoods an approach with a higher, computational overhead might be feasible: The neighborhood hash rules are very broad, incapable of detecting many common wireless topologies where rebroadcasts could be avoided.

A more detailed view could be achieved by every neighbor advertising its full TX throughput list to other neighbors on the according interface.

Receiving neighbors would then have a full RX and TX table between neighbors in the direct, one-hop vicinity.