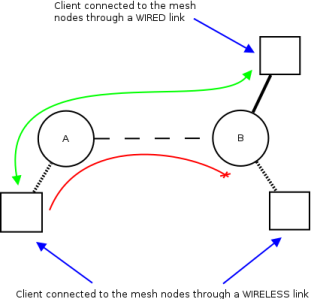 Note that packets are checked either at the sender or the receiver node, therefore, if at least one of those have AP-Isolation enabled, the communication is forbidden. However we strongly suggest to enable the AP-Isolation on all the nodes in order to prevent wasting of resources. (E.g. send of data over the mesh knowing that it is going to be dropped at the receiver)

Broadcast and multicast packets instead do not have a single destination, therefore such packets could be destined for wireless clients as well as wired clients. B.A.T.M.A.N.-Advanced has no way to distinguish these cases. To not completely block needed broadcast traffic (ARP for instance) broadcast and multicast traffic is forwarded through the mesh even between wireless clients.

The AP-Isolation mechanism allows the user to block wireless-to-wireless payload traffic, but this beaviour might be not enough in some setups where a more sophisticated solution is needed.

The Extended AP Isolation is an improvement that allows the user to decide which client has to be classified as isolated by means of firewall rules, thus increasing the flexibility of this feature. batman-adv extracts the fwmark that the firewall attached to each packet it receives through the soft-interface and decides based on this value if the source client has to be considered as isolated or not. Similar to other client attributes, the isolated-state is announced throughout the network in order to inform all other mesh nodes.

Like in the basic mechanism, with this extension isolated-to-isolated traffic is possibly dropped at the source, while broadcast/multicast packets are normally delivered but only after batman-adv has restored the original fwmark. This gives the user a chance to set other firewall rules that prevent, for example, this packet from being forwarded to unwanted interfaces.

For more details about the Extended Isolation and how to tell batman-adv which fwmark it has to look for, please read the related page.